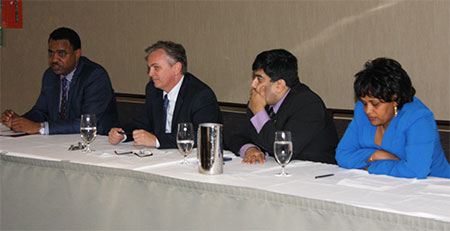 (Far Left) His Excellency Kassa Tekeleberihan Gebrehiwot, Speaker of the House of the Federation speaks in Ottawa.

During the mission delegates visited institutions key to Canada’s federal system of government, such as the Senate, the House of Commons and the Ontario Ministry of Intergovernmental Affairs. The purpose of the visit was to learn about Canada’s federal system of government, share Ethiopian experiences and build networks with the Canadian academic community.

Concluding the mission, His Excellency Kassa Tekeleberihan Gebrehiwot delivered a public lecture to an audience of public officials, public policy experts and graduate students. The lecture outlined Ethiopia’s experience with implementing federalism within a multicultural context. His Excellency argued that the key to Ethiopia’s stability and sustainable economic growth is a system of governance that accommodated diversity and autonomy. Decentralized governance has allowed citizens to participate in decision-making, giving a voice and ownership to those involved in the development of Ethiopia. Her Excellency Birtukan Ayano, Ambassador of the Federal Democratic Republic of Ethiopia to Canada provided closing remarks for this event. 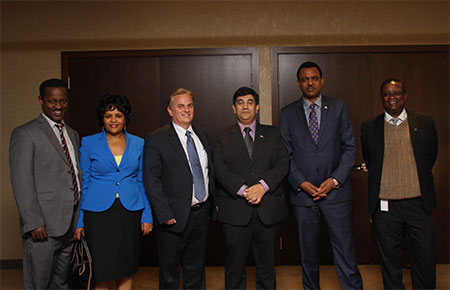 Ethiopia is one of the most active partners of the Forum of Federations and over the years, the Forum has benefited from a very fruitful relationship with the House of the Federation. The Forum also has had significant programming in Ethiopia since this country joined the Forum in 2006.

Ethiopia: Along the Path of Democratic Federalism – Link to the presentation of His Excellency Kassa Tekeleberihan

Ethiopia: Along the Path of Democratic Federalism