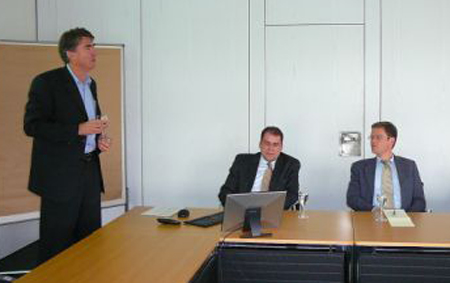 A Forum expert recently completed the research phase in a study on Benchmarking in Federal Systems a system that is based on developing practical measuring tools for improving performance by learning from best practices.

The aim of the Forum’s research is to generate comparative knowledge on the experiences of federal systems in introducing benchmarking methods in policies executed by constituent units (states or provinces) as a way to foster learning and to improve government performance.

Prof. Alan Fenna, the Forum’s lead benchmarking expert, met with officials of the OECD in Paris; the European Union; of the German, Swiss and Spanish governments as well as representatives from LÃ¤nder governments, Cantons and Autonomous Communities, (which are similar to states or provinces) .

His mandate is to produce a comparative study on benchmarking in six federal countries: Australia, Canada, Germany, Spain, Switzerland, the United States and the European Union. His study is due by the end of March 2010.

The professor’s meetings confirmed that benchmarking is a topical issue in many federations.

For example, Germany has just introduced a constitutional amendment providing for the introducing of voluntary benchmarking exercises (Leistungsvergleiche) between LÃ¤nder.

Officials in Switzerland have also engaged in lively debates about this learning tool, while their counterparts in Spain are looking into ways of introducing benchmarking in the context of Spain’s new model of public financing which seeks to reduce disparities in per capita financing and to give the autonomous communities greater financial independence and taxing powers.

The European Union is seeking to arrive at a new contextualized form of benchmarking called the Open Method of Coordination. It covers a wide range of policies, such as employment, research policy, entrepreneurial policy, anti-exclusion policy, enterprise policy, education policy, EU enlargement and pension reform.

The concept of benchmarking was originally developed by companies operating in an industrial environment. In recent years public or quasi-public bodies including national and sub-national governments have begin making use of this tool.

Visit the Forum’s page on Benchmarking in Federal Systems