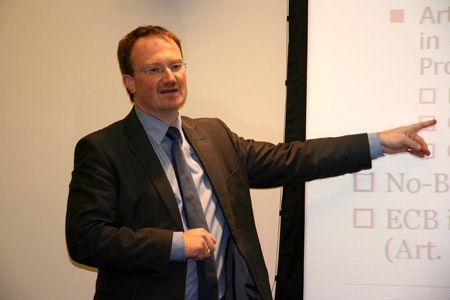 At a Forum seminar in Ottawa, Prof. Lars Feld of Heidelberg University explains how, after the debt crises in Greece and other European Union countries, the EU could save the Euro.

After an injection of nearly US $1 trillion from the European Central Bank, the five European Union (EU) member countries with the highest public debts are still not out of trouble.

That was the analysis of Prof. Lars Feld, speaking at a Forum luncheon meeting of about 20 embassy staff, Canadian government officials and NGO leaders in Ottawa on June 25, 2010.

Prof. Feld teaches Economics at the University of Heidelberg and is a member of the Academic Advisory Board to the German Federal Finance Ministry (Lifetime Appointment). He is working with the Forum on a project on fiscal responsibility, accountability and transparency in federations.

He addressed the issue of the five weakest EU countries, Portugal, Ireland, Italy, Greece and Spain which are known by the acronym "PIIGS,” who are often blamed for the current economic crisis in Europe.

But the five countries are not solely responsible for their high debt levels, Prof. Feld said.

"Spain and Ireland held their public debt-to-GDP levels even below the 60 per cent maximum set by the EU,” he told the group, "But then they were hit by the financial crisis.”

That crisis forced the five countries’ governments to borrow huge amounts that shot up their public debt levels.

First the EU provided US $135 billion to save Greece from collapse.

Then the EU stepped in with its US $923 billion injection of funds.

To carry out the bailout, the European Central Bank (ECB) took strong action. While the ECB was not allowed to buy government bonds from the five countries, the central bank did it indirectly by buying the bonds through financial markets, Dr. Feld added.

"Was this a rescue package or was it a bailout?” Dr. Feld asked rhetorically. "It’s actually both it’s not just about the exchange rate and stabilizing the Euro, it’s about (calming) the financial markets.”

The maximum debt levels 60 per cent of a country’s yearly Gross Domestic Product (GDP) for each country’s total public debt, and a maximum deficit of three per cent of yearly government spending, are cornerstones of the EU Stability and Growth Pact.

Prof. Feld added that he does not believe that the EU will collapse over the economic crisis of its weakest members.

He said the two most promising options for the EU would be to strengthen the European Stability and Growth Pact the treaty that set the existing limits on government debts and deficits or to introduce a "bankruptcy code” that would allow governments to declare bankruptcy.

Prof. Feld made it clear that he intended bankruptcy in this sense as a way for governments to reorganize under clear rules so that creditors would be treated fairly and that governments could re-emerge out of bankruptcy (in a similar way that firms in the United States emerge from reorganization under Chapter 11 bankruptcy).

But, when asked "how will the crisis shape the way Europe is likely to function tomorrow,” he said that pressure to centralize economic power at the EU level, "a kind of economic government” could make the Nordic countries, the Eastern European countries, and others very angry.

"Then tensions could increase then perhaps there would be a breaking up (of the EU), or you could end up with a federation. Anything is possible if you go that route. Much can happen.”

In addition to his affiliation with the University of Heidelberg, Prof. Feld is also a Research Associate at the Centre for European Economic Research in Mannheim and at University of St. Gall, Switzerland, where he received his PhD. He is managing Editor of the journal titled: Perspektiven der Wirtschaftspolitik (Perspectives of Economic Policy).

In 2005, the prestigious German weekly "Wirtschaftswoche” honoured Prof. Feld as one of the 10 best young German economists. He also received the Excellence in Refereeing Award of the American Economic Association in 2008.