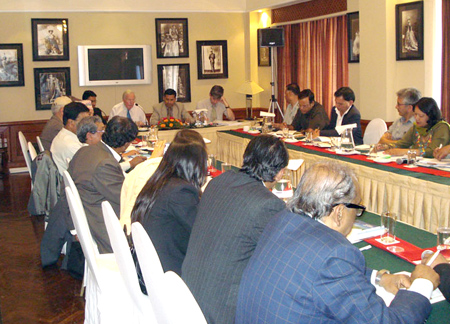 Framers of Nepal’s constitution discuss how other federal nations enacted their constitutions.

Professor Ronald L. Watts, one of the world’s leading experts on federalism, was recently dispatched to Nepal to advise and inform politicians of all stripes on how constitution writing and federalization processes have been dealt with in other federal countries.

Nepal’s politicians have a short time left until the May 28, 2010 deadline by when they are meant to agree on the text of the country’s new Constitution. The country’s 10-year civil war ended in 2006.

Dr. Watts is a Professor Emeritus of Queen’s University in Canada and a co-founder of the Forum, which called on his services to assist in Nepal.

According to several participants, the discussions at Dr. Watts’s roundtables made them re-think and re-evaluate their party’s positions on some of the unresolved issues in writing the constitution. Meanwhile, concern is mounting as to whether Nepal’s Constituent Assembly will meet the deadline.

The new constitution, which is to formalize and implement Nepal’s transformation from a centralized authoritarian monarchy to a federal democratic republic, needs to be accepted by all three major political parties and this means agreeing to every single article of the draft legislation.

While the CA leaders and the government continue to abide by the deadline, there is still no agreement on key constitutional issues such as the details of state restructuring, the eventual form of government, the electoral system, or the independence of the judiciary.

Other major changes unrelated to the constitution writing process have been called for by some political actors to set the stage for an agreement. These include the possible formation of a new government, the return of all properties seized during the 10-year conflict, and the completion of the integration and rehabilitation process of former combatants.

The two-week mission by Dr. Watts also included a series of high-level meetings with party leaders and representatives of the government and the bureaucracy.

The issues identified and discussed by the participants in the roundtables with Dr. Watts included the basis and principles for the formation of Nepal’s new provinces, ethnicity and federalism, fiscal federalism and the sharing and distribution of natural resources, dispute resolution between the provinces, constitutional commissions and the judiciary, among other topics.

Dr. Watts also met with the President of Nepal, Ram Baran Yadav; Prime Minister Madhav Kumar Nepal; leading parliamentarians, high-ranking officials from the public administration and party leaders. The discussions centered on the experiences of other countries that underwent transformation from a unitary to a federal state and the necessary conditions for a successful completion of the constitution-writing process and its subsequent implementation.

The Forum’s three-year program in Nepal is funded by the Swiss Development and Cooperation Agency (SDC) and aims to assist the country in building its capacity to develop and implement a federal democratic system.