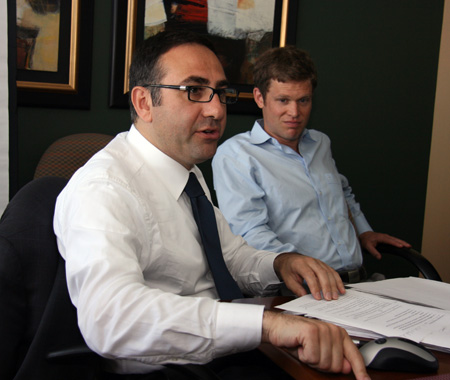 Professor Vincenzo Antonelli of Italy, centre, speaks to a Forum gathering on Italy’s increasing federalization. To his left is Felix Knuepling, the Forum’s director of Europe.

Italy is facing many challenges on its way to becoming increasingly federal, according to Italian federalism expert Vincenzo Antonelli, who spoke at a recent lunchtime seminar at the Forum of Federations’ Ottawa headquarters.

Prof. Antonelli, an assistant professor of European administrative law at LUISS University in Rome, explained that Italy began its move towards federalism more than 10 years ago when a series of constitutional reforms were introduced that shifted political powers to the regions.

Despite these reforms, Antonelli said Italy continues to face major hurdles. For instance, the Italian constitution recognizes five levels of government (local, metropolitan, provincial, regional, and that of the republic) whose responsibilities often overlap. The outcome is often inefficiency and a lack of transparency.

As a result of Lega Nord’s higher profile in the coalition, it has been advancing its chosen policies in the Italian Parliament. In keeping with the coalition’s stated goal for federal reforms, a new fiscal federalism bill was introduced in February. It is expected that the reforms will be completed in two years if the coalition remains intact.

The federalism gains may remain modest however. Mr. Antonelli stated that other factions in the coalition including one headed by Berlusconi’s main party rival, Gianfranco Fini – do not support federal reforms. This "lack of cohesion” in the coalition, Prof. Antonelli said, is the biggest threat to government stability in Italy and represents a potential block to Italy becoming more federal.