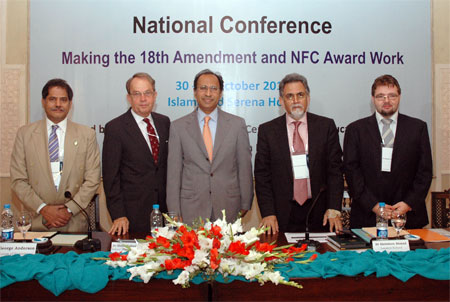 Officials launch national conference. Pakistan’s Federal Minister of Finance, Dr. Abdul Hafiz Shaikh (centre) poses with conference officials. He is flanked on his left by Dr. Ehtisham Ahmad, the conference lead adviser; and Ferdinand Jenrich, of the German Embassy; and on his right, George Anderson, president of the Forum of Federations, and Zafarullah Khan of Civic Education Pakistan, the Forum’s partner in Pakistan.

Participants at a recent Islamabad conference on making Pakistani federalism work strongly agreed on the transformational and positive character of the 18th Amendment to the country’s constitution and on the National Finance Commission’s (NFC) award – or allocation of increased funding – to the country’s provinces.

The 18th Amendment restored important powers to Pakistan’s Parliament and to the country’s provinces, withdrawing them away from the executive.

Participants at the Oct. 30 31, 2010 event concurred that the changes reflect a clear desire across the country for a system of government which is closer to the population and to the spirit of the country’s 1973 constitution.

The conference was opened by Dr. A. Hafiz Shaikh, Pakistan’s Minister of Finance, who indicated his strong interest in the conclusions that would emerge from the conference and he underlined the importance of follow-up.

The event, held at the Serena Hotel in Islamabad, was organized by the Forum of Federations, an international NGO supported by nine federal countries, and the Centre for Civic Education Pakistan, with financial support from the German Foreign Ministry. Dr. Ehtisham Ahmad, of the London School of Economics and the University of Bonn, played a leading role in the planning of the conference.

It emerged from the conference that given the unbundling of government spending responsibilities, there is a need to revisit the revenue assignments, in particular, the own-source revenues of provinces and local governments.

It is also imperative to increase the overall tax to GDP ratio and to attend to the reform of the Value Added Tax and options for jointly sharing the base and control over the tax featured prominently.

Recommendations included providing more independence to the Federal Bureau of Revenue, perhaps under the authority of the Council of Common Interest (CCI), so that the Goods and Services Tax and income tax bases could be utilized for all orders of government.

Other recommendations included developing the capacities of provincial civil servants to match federal competences, providing the National Finance Commission with a secretariat and commissioning independent fiscal research to evaluate options for the NFC consideration well ahead of Awards.

Among the more than 40 participants, there was extensive discussion of both the 18th Amendment and the NFC award. A recurring theme was Pakistan’s low level of tax revenues compared to other countries at a similar level of development, and the need to enhance tax collection, including at the local and provincial levels.

The transfer of competencies to the provinces will also necessitate a focus on building the necessary capacity to deliver services at the local and provincial levels, and own-source revenues should help in providing greater incentives to enhance governance.

The conference concluded with a panel and round table discussing future research needs, including the areas Pakistan might look to for relevant comparative experience in other federations. Participants agreed that Pakistan already has considerable research capacity but needs to increase its efforts to mobilize and channel that capacity so that it can be used in decision-making, for example at the time of the next Finance Commission.