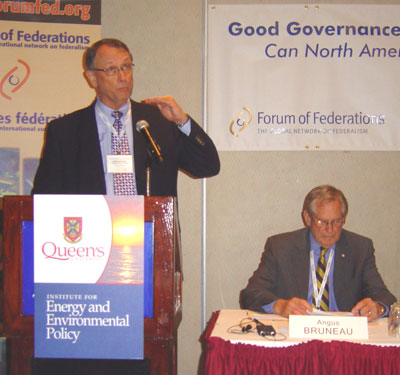 Tony Anthony, Senior Vice-President of the Edison Electricity Institute, addresses delegates at the Good Governance and the North American Electricity Sector conference held recently in Toronto. Angus Bruneau, former CEO of Fortis Inc. and co-chair of the event, is seated to his left.

How two federal countries regulate their electricity sectors to meet growing demands for power was the topic of a recent workshop organized in Toronto by the Forum and Queen’s University of Kingston, Ontario. The event, titled Good Governance and the North American Electricity Sector, was attended by 35 participants including industry representatives, government officials, academics and regulators from Canada and the United States.