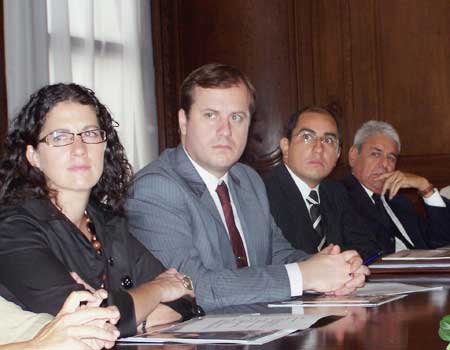 Participants listen to a speaker at a Global Dialogue roundtable in Buenos Aires. From left to right:
Ana Florencia Salvatelli, Director General of Judicial Affairs, Cabinet Office; Marcelo AdriÃ¡n Bufacchi, Chief of Advisors of the Cabinet Office; Dario Santiago Nassif, Advisor to the Senate of Argentina and Carlos Hugo Valdez, Advisor to the General Administration of the Judicial Power of the Province of Cordoba.

Federalism experts and practitioners from across Argentina gathered in Buenos Aires recently to discuss the workings of intergovernmental relations in their country. The roundtable, co-organized by Walter Carnota, PhD, and Chair of Public Law at the University of Buenos Aires, was one of 12 events on this theme being held by the Forum in one dozen federal countries around the world as part of its Global Dialogue series, in co-operation with the International Association of Centers for Federal Studies.

More than 20 participants discussed how the expanding powers of courts and judges affect politics as well as federalism in Argentina. They agreed that there is a lack of adequate institutional channels for intergovernmental relations to play out. The topic of fiscal federalism was another highlight of discussion as revenue-sharing systems are not yet fully operational in Argentina. Other highlights of the roundtable included discussions dealing with cultural and regional differences, the structure of the Argentine Senate and provincial legislatures, the creation of interprovincial regional bodies and the full implementation of intergovernmental conferences such as a meeting of Argentina’s provincial governors.

Some participants disagreed about the legacy of Argentina’s constitutional reform regarding federalism. Changes to the Argentine constitution in 1994 included the shortening of the presidential term to four years from six, the possibility for the president to be reelected and the removal of the requirement that the president be Roman Catholic. The terms of Argentina’s 72 senators (three for each province and three for the city of Buenos Aires) were shortened to six years from nine and the capital of Buenos Aires was given the status of Autonomous City. Elections were previously decided by an indirect vote in which citizens elected representatives to the legislature and the representatives in turn selected the president. Now, elections are decided by a direct voting system in which eligible citizens vote for their favourite candidate. If no candidate wins a majority, there is a second vote held opposing the two candidates from the first round who won the most votes.