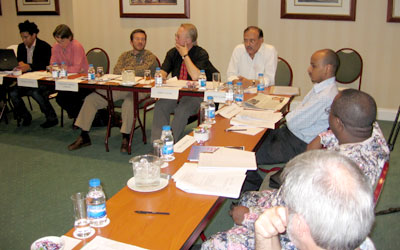 This was one of the key conclusions reached at the International Roundtable on Local Government and Metropolitan Regions; a dialogue of international experts about current trends, issues and challenges confronting local governments.

The four day event, part of the Forum’s Dialogue on Federalism, took place in Johannesburg from April 19 to 22, 2007. The roundtable was organized in cooperation with the Community Law Centre, University of the Western Cape, South Africa; which is headed by Professor Nico Steytler.

Among the topics discussed were local governments and how their legal status affects their practice, the financing and revenue bases of local governments, governance at the local level and intergovernmental relations.

On the second day of the conference, international experts participated in a one-day event organized in cooperation with the Office of the Premier and the Department of Provincial and Local Government of the Province of Gauteng. The focus of the event was discussion among experts on the notion of creating a Global City Region in the province of Gauteng, which is highly urbanized, with a population of almost nine million. Its two main cities are Johannesburg and Pretoria. International participants shared their experiences with representatives of Gauteng regarding development strategies. Gauteng is seeking to manage the intergovernmental relations component of this endeavor in such a manner as to develop a metropolitan region that shares services efficiently, controls growth and population and competes economically on the global stage.

The other days of the roundtable were devoted to dialogue among the international participants on the theme of the meeting, Local Government and Metropolitan Regions.