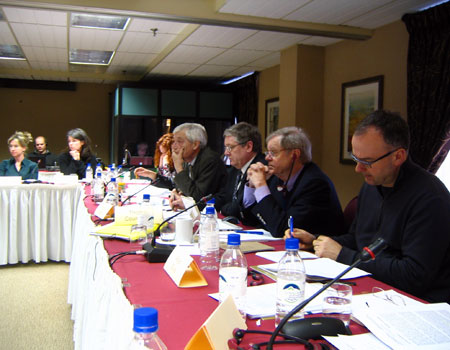 Practitioners of federalism, political scientists and legal experts from all over Canada gathered in Montreal on February 27, 2009, for the Forum’s Global Dialogue roundtable on intergovernmental relations (IGR).

The event was co-ordinated by Marc-Antoine Adam, director of strategic planning in the Government of QuÃ©bec’s Intergovernmental Affairs Department.

The discussions brought to the forefront the different views regarding IGR, especially those of the Aboriginals, the federal government and the provinces.

This plurality of opinions also emerged in the varying views expressed with regard to the degree of centralization of the Canadian federation.

The contrasting ideas of intergovernmental relations practitioners, the policy community and the general public were also discussed.

The more lively exchanges took place around issues related to asymmetrical federalism, a type of federalism in which constituent units (provinces, states), have different sets of rights and obligations; and the role of non-government organizations in intergovernmental relations.

Concerns about political, constitutional, social and economic issues regarding intergovernmental relations in Canada were also raised throughout the day.