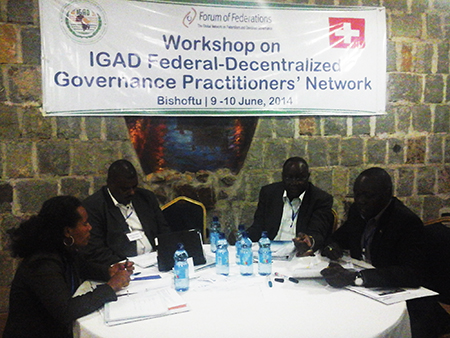 The Forum of Federations (Ethiopia Country Office) recently co-organized a workshop in Bishoftu, Ethiopia (June 10-12) attended by experts from the seven member states making up the Intergovernmental Authority for Development (IGAD): Ethiopia, Kenya, Uganda, Somalia, Djibouti, Sudan and South Sudan. Each country was represented at the 2-day event by at least one government official, one independent academic or civil society expert, plus an IGAD focal point. The aim of the workshop was to provide input to IGAD on how to establish a regional learning network on federal-decentralized governance its objectives, structures, programming priorities, participation of different stakeholders, etc. The event was convened by IGAD’s Division of Peace & Security, under its Director, Ambassador Tewolde Gebremeskel. Funding was provided by the Swiss Foreign Ministry’s Human Security Division. 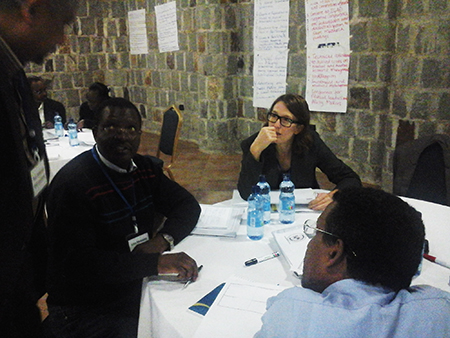 In his opening remarks to the workshop, the Swiss Ambassador to Ethiopia, Djibouti, South Sudan, IGAD and the Africa Union, Andrea Semadeni, noted that the Swiss government’s purpose in supporting this initiative is to trigger a debate within IGAD countries on governance issues. He suggested that a regional learning network on decentralized governance could be instrumental in supporting IGAD’s peace efforts in the region, which is unfortunately home to several conflicts. To that end, in his opening remarks for the workshop Amb Tewolde told the participants that: "It is IGAD Secretariat’s hope that this important forum will provide the very much needed expert input…” to this important initiative. 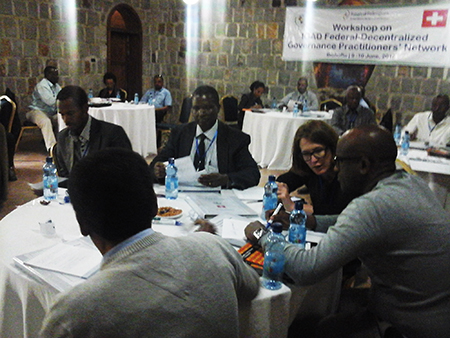 The idea to establish such a network is actually an outgrowth of the 5th International Conference on Federalism, held in Addis Ababa in late-2010. In February 2013 the first Regional Conference on Federalism & Decentralization in East Africa was convened; the recommendation for IGAD to create the network was the main outcome of that conference. Leading up to this workshop a Concept Note was prepared with input received from various sources, including IGAD member country ambassadors, members of parliament and others. 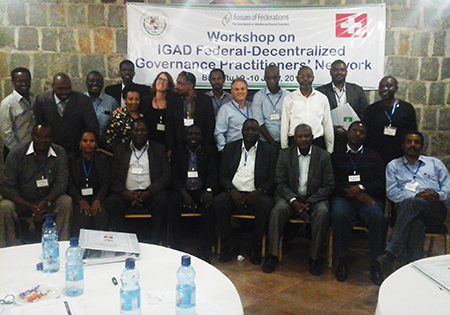 All participants of the Experts’ Workshop fully recognized the variety of distinct systems and contexts among their countries but also appreciated that special benefits could be gained by learning from each other’s experience and expertise. They also noted that federal-decentralized governance, while never a panacea, lies at the core of many common challenges of peace, security, democracy and development, and that to a considerable extent the IGAD countries share a common destiny as a region in meeting these objectives.

The workshop agenda focused on providing final inputs for the draft Concept Note, which can now be finalized for formal adoption by the IGAD Division of Peace & Security, and which will then guide IGAD and its partners in bringing the network to reality. The workshop also focused on providing recommendations for a one-year interim period that would allow IGAD to collect more data and to consult more deeply with more stakeholders before a final plan is submitted at the end of the year for approval by the IGAD’s decision-making structures. The areas of intervention highlighted most at the workshop were, among others: applied policy research, public awareness, political dialogue, providing an information portal and technical subject-matter workshops.