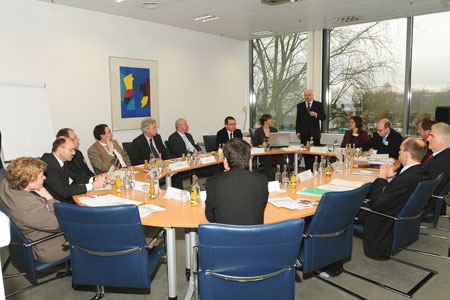 Participants shared views at the German national roundtable on intergovernmental relations in Hamburg.

Informal lines and means of collaboration between Germany’s national government and its subnational governments are as important as the formal ones, according to participants at a recent Forum roundtable in Germany.

The participants, composed of federalism experts, members of government, political scientists and practitioners of federalism, came together in Hamburg, Germany, for a national roundtable on intergovernmental relations. The event was part of the Forum’s Global Dialogue on Federalism.

Practitioners exchanged views and insights into the functioning of intergovernmental relations in Germany. Most participants agreed that the old divide between the Communist Eastern Germany and the non-Communist Western Germany no longer has any bearing with regard to relations between Germany’s sub-national units, called LÃ¤nder.

The topic that generated the most discussion was how Germany’s sub-national governments and legislatures go about influencing policy-making on the European level and their levels of success. The roundtable also debated how networks within and between levels of government influence the policy-making process.