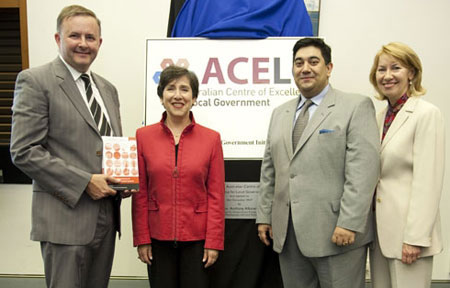 The Australian Centre of Excellence for Local Government was recently inaugurated in Sydney in a ceremony where the Forum held the Australian launch of its book on capital cities.

Speaking at the ceremony was Anthony Albanese, Australia’s federal minister of Infrastructure, Transport, Regional Development and Local Government, who encouraged the Forum to collaborate closely with the new centre to assist Australian practitioners gain access to comparative expertise on metropolitan governance.

Mr. Albanese said in his speech that Australian governments’ partnership with local municipalities is a means to improve the way both the federal and state governments serve local communities.

And he emphasized the importance of learning from the experiences of other countries and said the Forum’s recently-published book, Finance and Governance of Capital Cities in Federal Systems, is an important contribution and will afford the opportunity for Australian practitioners to learn from others.

In response to Mr. Albanese, Forum Vice President Rupak Chattopadhyay said the Forum is privileged to contribute value to the policy process in Australia, one of its nine partner countries.

The launch, held on December 13, 2009, was attended by about 70 guests including Maxine McKew, the parliamentary secretary for local government; Philip Black, deputy lord mayor of Sydney; senior state and federal government officials and international guests. Also present were the book’s two editors, Enid Slack and Mr. Chattopadhyay, as well as Professor Graham Sansom author of the chapter on Australia and the executive director of the new centre.