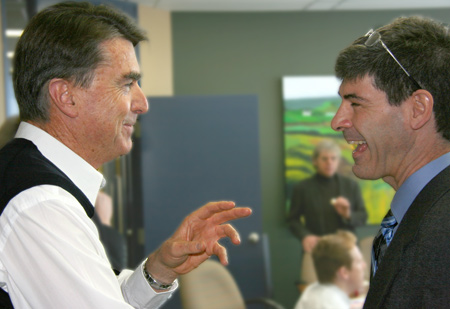 Alan Fenna (left) speaks with Forum Vice-President Werner Thut before a luncheon address in the Forum boardroom in Ottawa.

Australian Prime Minister Kevin Rudd’s attempt at co-operative federalism has been hampered because of an announcement on March 3, 2010, that the federal government was taking effective control of Australia’s health care system, according to an Australian politics professor.

The comments were made by Dr. Alan Fenna, professor of political science at the John Curtin Institute of Public Policy, Curtin University in Perth, Western Australia.

Prof. Fenna is a former staff member in the federal affairs division of the cabinet of Western Australia. He was speaking at a luncheon address at the Forum of Federations’ headquarters in Ottawa, attended by a roomful of international diplomats, Canadian government staff and NGO representatives.

"Instead of having the states manage health as per the constitution, power will be devolved to regional authorities, separate from the states,” Dr. Fenna said, a day after the announcement.

"There is strong scepticism that this may be pushing the ability of the Rudd government. It could be politically and administratively impossible to do this.”

The funding for the new regional health-care authorities is to come from a 30 per cent slice of Australia’s Value Added Tax or GST, the same share of the tax that was assigned to the states by the federal government of Rudd’s predecessor, John Howard.

The dramatic announcement came as a shock because when Rudd campaigned for election in 2007; he promised that his Labor Party would reform federalism if elected to power.

The health care system did need reform, Fenna said. "The two levels of government operate in parallel in all areas: hospitals are funded by two levels and doctors are now paid by a national system.”

However, Rudd could have avoided the federal take-over by setting up a system in which the central government sets the rules and the states operate the system, Fenna added.