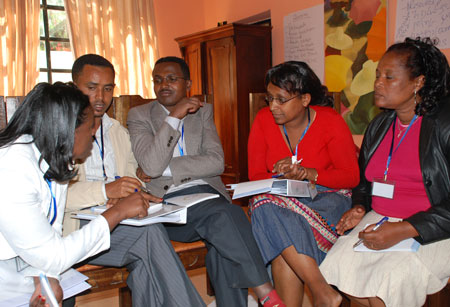 Participants gather in a seminar at the leadership retreat in Adama, Ethiopia.

The two programs, organized by the Forum and Ethiopia’s House of Federation, the upper chamber of the federal legislature, drew 64 participants from all levels of Ethiopia’s federal government and from civil society organizations.

The first of the two programs, organized as retreats, took place Nov 22-26, 2010, with approximately 30 participants, including leading officials from federal and regional government agencies as well as from civil society organizations, political parties, religious institutions and media. Participants also included a significant number of academics.

Mr. Habtamu Ninni, Secretary General of the Secretariat of the House of Federation, officially opened the program. Mr. Habtamu underscored the importance of the program in strengthening Ethiopia’s young federation and thanked the Forum for its activities in Ethiopia in co-operation with all stakeholders.

Ms Selome Taddese, an Ethiopian training expert on transformational leadership and communication who has worked in several African countries and abroad, facilitated the program.

The program helped participants to understand how federalism could help manage conflicts and what roles leaders at different levels and institutions can play in order to strengthen federal governance in Ethiopia. In-depth seminars were held on the unique characteristics of Ethiopian federalism, its successes, challenges and opportunities. The participants were also exposed to the experiences of other federations through several case studies from which they drew valuable lessons for Ethiopia.

The participants responded positively to the themes design and methodology of the program. They appreciated the chance to learn from the experiences of other federations.

Shawn Houlihan, the Forum’s Africa director, briefed the participants on the Forum’s activities all over the world and Dassa Bulcha, program director for the Forum’s Ethiopia Office, explained the objectives and components of the Ethiopia Federalism Leadership Program.

H.E. Kassa Tekleberhan, speaker of the House of Federation, participated in the closing session of the program. He reminded participants and experts of the successes Ethiopia has achieved in building a federal system over the last 16 years and the unfinished tasks that his country still faces. He expressed the commitment of his government to work with the Forum and to learn from the experiences of other federations, citing the 5th International Conference on Federalism (which Ethiopia hosted from December 13-16, 2010, as one very important opportunity. He also explained the need to expand the retreat program to reach more Ethiopian leaders at different levels and sectors.

The second retreat was held over December 6-10, 2010. A total of 32 leaders participated on the retreat. At this retreat, the number of women participants was increased to 26, many of them leaders, including a number of parliamentarians. The participants were from national and state legislatures, the House of Federation, women and youth leagues, federal ministries and civic society organizations.

The program was opened by H.E. Demitu Hambisa, Member of the House of Federation and of the Council of Constitutional Inquiry and the Speaker of the Caffee (Oromia Regional State Legislative Council). In her opening remark, Demitu stressed the importance of the program for women’s leadership in Ethiopia.

This retreat was facilitated by Ms. Selome Taddese, an expert in leadership and communication. She was supported by a team of international and Ethiopian experts. Dr Bertus DeVilliers of Australia/South Africa spoke about theory and origin of federalism, and challenges and opportunities of new federations from international perspective. Other Ethiopian experts, Mr Tsegaye Regassa and Dr Solomon Negus made presentations on Ethiopian federalism and the accommodation of diversities, and on fiscal federalism and economic development, respectively. Mr Dassa Bulcha, program director of the Forum of Federations Ethiopian Office, also participated.

During the five days of the retreat, emphasis was given to the connections among three themes: federalism, conflict management and leadership. Participants emphasized the roles women’s leadership could play in strengthening federalism and in mitigating and resolving conflicts in Ethiopian federalism. Time and again, participants also discussed how federalism impacted the lives and leadership opportunities for women in Ethiopia. They participants appreciated the timing of the retreat, which was held just before Ethiopia hosted the 5th International Conference on Federalism.

Both retreat programs were conducted in Adama, a business and conference complex in the middle of the Great East African Rift Valley.

The two retreats were part of series of retreats the Forum is conducting throughout Ethiopia. Previously, one retreat program and two design workshops were organized on similar themes, drawing more than 90 leaders from various government and non-government institutions. Several such retreats programs will be held in the regional states of Ethiopia in the year 2011.

The Ethiopia Federalism Leadership Program is being implemented by the Forum in partnership with the Ethiopian House of Federation with financial support from the German Foreign Office.