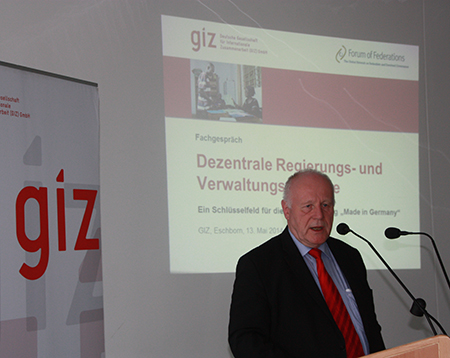 Dr. Georg Milbradt, Chairman of the Board of Directors of the Forum of Federations speaks in Frankfurt on May 13, 2014.

On May 13, Forum of Federation chairman Georg Milbradt, former Premier of Saxony, gave the key-note speech at a workshop jointly organized by the Forum of Federations and German Development Cooperation GIZ Gesellschaft fÃ¼r Internationale Zusammenarbeit.

The objective of the workshop was to discuss the relevance of federalism and decentralization projects in international development approaches. The workshop took place at GIZ Headquarters in Eschborn near Frankfurt and drew around sixty German experts working in the field of development cooperation.

The following key points emerged during the workshop discussion:

First, decentralisation should not be understood as a purely technical issue. Rather it is through the interaction of civic-democratic values and the principle of "subsidiarity” that governments generate positive impact on citizens and that their legitimacy is enhanced.

Second, to comprehend the context in which decentralised forms of governance develop, it is necessary not only to be aware of the administrative structures but also to dispose of a thorough understanding of the social, cultural and historical facts and linkages.

Third, decentralisation and particularly federalism flourish if diversity is not undermined. In fact, respect for diversity is an important asset of federal states. However, it is also key for federal states to establish rules that secure a common understanding of statehood.