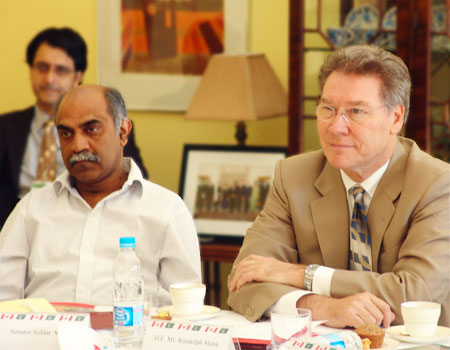 Pakistani Senator Safdar Abbasi of the Pakistan People’s Party and Mr. Randolph Mank, High Commissioner of Canada to Pakistan, participate in a recent dialogue on federalism in Islamabad.

Building on the September 2009 launch of its Pakistan program, the Forum of Federations recently participated in a half-day federalism dialogue with 17 Pakistani stakeholders including senators, academics and political party members in Islamabad.

Forum Vice-President Werner Thut delivered opening remarks at the event, which was organized by the Canadian High Commission in Pakistan. Dr. Thut discussed some of the challenges to federalism in Pakistan and goals of the Forum’s program there. The Forum was also represented by Marc Lemieux, the Forum’s Senior Program Manager, and Michel de Salaberry, Canada’s former Ambassador to Jordan, Iran and Egypt.

Members of the Constitutional Reform Committee, who attended the event, noted that the Forum’s Pakistan project is timely and that the organization’s experience on federal models is needed in Pakistan especially with regard to fiscal management models and the distribution of powers among different orders of government.

The Forum of Federations recently initiated a $3.5 million development assistance program in Pakistan funded by the German Foreign Office. The aim of the 2.5-year program is to help in strengthening Pakistan’s federal system a system established under the country’s 1973 Constitution, but which has not been implemented to its full potential.