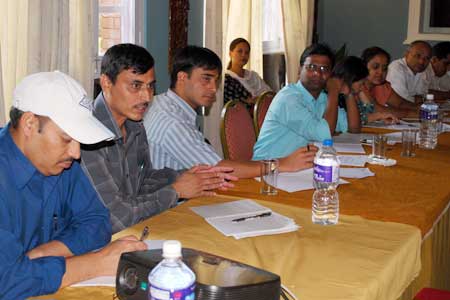 Participants at a Forum roundtable in Kathmandu, Nepal discuss the teaching of federalism in secondary schools.

Nepali teachers, school administrators and government officials met in Kathmandu recently to discuss the teaching of federalism in secondary schools.

Nepal is in transition from a monarchy to federal republic. A new constitution is now being drafted for adoption in 2010. The subject of federalism is therefore quite relevant to Nepal.

Forum intern Jonathan Holmes, who has spent several months researching secondary school curricula in Nepal, spoke to the group about his findings on the current state of federalism education in Nepal. Nepal’s School Sector Reform Plan is to be implemented between 2009 and 2015.

There is very little institutional knowledge about federalism in the former kingdom. The Forum is helping Nepali stakeholders broaden their understanding of federal concepts.

Participants said that learning about federalism in Nepal is hampered by a lack of support materials and quality textbooks. Also, there is a shortage of university graduates from social studies programs, which may also be a factor hindering the development of quality curriculum on federalism.

The Forum’s video, The Challenge of Diversity: The Federal Experience (Nepal) to be released later this year, was also screened at the event.

The event, held on July 31, 2009, was supported by the Swiss Agency for Development and Cooperation.

Federalism is a relatively new idea for Nepal. After 10 years of civil war, antagonists and stakeholders signed a 2006 Comprehensive Peace Agreement. The following year Nepal’s interim parliament decreed that the new republic of Nepal would adopt a federal system of government.