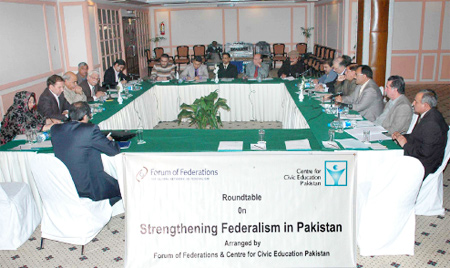 A major two-year federalism learning program in Pakistan was recently kicked off with roundtable discussions in four Pakistan provinces.

The program, organized by the Ottawa-based Forum of Federations and its Pakistan partner, the Center for Civic Education Pakistan, is funded by a grant from the German Ministry of Foreign Affairs. It ends Dec. 31, 2011.

The purpose of the roundtables was two-fold: to build relations with federal stakeholders in Pakistan and to launch what will become a two-year dialogue on the challenges and priorities in order for federalism to be made to work more effectively in Pakistan.

There were 107 participants in the four roundtables, including 38 politicians, 23 academics, 22 members of civil society organizations, 18 journalists and 4 civil servants.

In the roundtables, the participants discussed the learning program’s design and agreed that it must provide them with global expertise on federalism, using examples and comparisons from many federal countries as well as an insight into other federal models.

The participants also expressed the desire to become involved in policy advisory groups and they agreed to support the creation and development of a Center for Federal Studies in Pakistan.

The four events were held in December 2009.

The last of the four roundtables was held with participants of Pakhtoonkhwa, also called North West Frontier Province (NWFP).