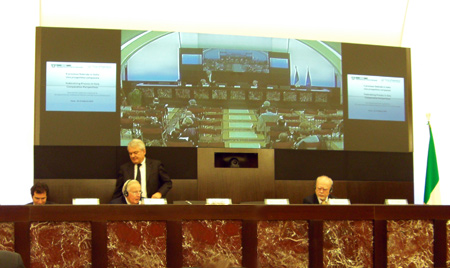 The Forum of Federations held a two-day international conference on federalism in Rome Feb. 18-19, 2010, in cooperation with the Department of Institutional Reform of the Government of Italy.

The conference looked at four topics at the core of the federalism debate in Italy, namely division of powers, reform of the senate, fiscal federalism and asymmetrical federalism.

The Rome conference was opened by Hon. Gianni Letta, State Undersecretary of the Italian Government, the country’s most senior public servant. The Forum arranged for the participation of experts from Australia, Canada, Germany, Spain and Switzerland.

Over the past 10 years Italy has been going through a political and institutional transformation that has led to the country’s increased federalization. This has come about because among the public there is dissatisfaction with the central governmental administration. There are also large economic regional disparities and reluctance of the richer northern part of Italy to transfer payments to the poorer south. In addition there is the need among many Italians for powers and services to be assigned to governmental levels that are closer to the citizens. This is called subsidiarity.

In 1999 and 2001, two constitutional reforms took effect in Italy which considerably increased the powers of the country’s regions and local governments. The 2001 reform completely reshaped the constitution regarding relations between the central government, the regions and the local governments. Recently, another step was taken in the process of federalizing the country, which was the May 2009 enactment of a new law on fiscal federalism, which is now being implemented.

The debates at the conference confirmed that while Italy is undergoing a significant transition, many issues need to be addressed, such as:

The following international experts participated in the conference: