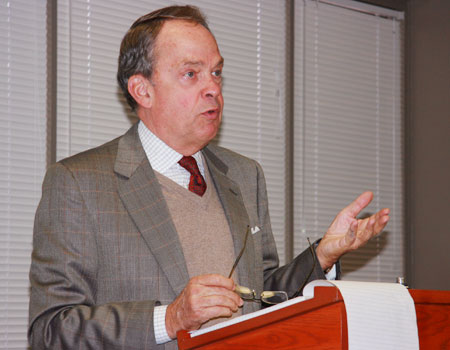 Forum President George Anderson speaks about federations and the global economic crisis at a recent event in Ottawa.

How can you keep subnational governments from going off in the opposite fiscal direction from the central government?

That was one of the big questions from those attending Forum President George Anderson’s presentation on federations and the global economic crisis at the Privy Council Office (PCO) in Ottawa on Oct. 21, 2009.

Mr. Anderson spoke to several diplomats from federal countries, staff from other ministries, and about two dozen staff members of the PCO, the office that provides research and advice to the Canadian prime minister and the cabinet.

The Forum President told of the problems faced by states in the U.S. who had state constitutions that prevented them from running a budget deficit while Washington was spending to stimulate the economy.

The other big question from the PCO staff, diplomats from federal countries, and other government ministries present was how to devise a fairer system of equalization payments to Canada’s provinces.

Mr. Anderson also said one could also consider the possibility that such a hybrid commission might have its mandate extended to HSTC transfers and employment insurance transfer payments from Ottawa to the provinces.