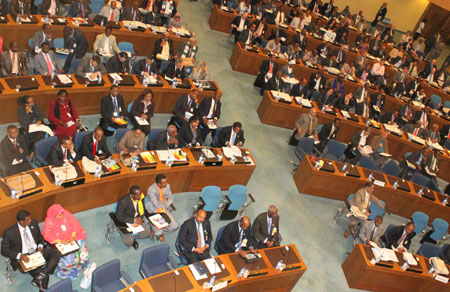 About 600 participants of the Fifth International Conference on Federalism attend the closing ceremony on Dec. 16, 2010.

Ethiopian Prime Minister Meles Zenawi closed the Fifth International Conference on Federalism on Thursday, Dec. 16, 2010, in Addis Ababa, ending a four-day event where more than 600 participants from Africa and abroad discussed the challenging issues of federalism.

The Forum of Federations was Ethiopia’s partner in organizing the conference.

Mr. Meles said that in hosting the conference, it was his hope that citizens of his country and of Africa would learn more about this form of governance, which he believes has been decisive in keeping his country together and making it a success in the 15 years since adopting its constitution in 1995.

He said it was also his hope that foreigners from abroad would learn about Africa and its experience with federalism.

Mr. Meles said that on both counts, the conference "far exceeded my expectations.”

It was the first International Conference on Federalism to be held in Africa. The theme of the conference was Equality and Unity in Diversity for Development.

George Anderson, the President of the Forum, thanked Mr. Meles for co-hosting the federalism conference, saying: "It was the right subject, the right time and the right place.”

"Thanks to the government of Ethiopia, this conference will long be remembered,” said Mr. Anderson.

In all, 282 international participants attended (including those from other African countries), and 350 Ethiopians.

During the conference, 45 papers were presented by experts, practitioners and academics.

The business of the conference will be completed when the papers are compiled, edited and printed, thereby capturing the significant body of knowledge that was shared at the conference.

The themes covered by the conference papers include:

The four previous international conferences were held in Canada, Switzerland, Belgium and India.