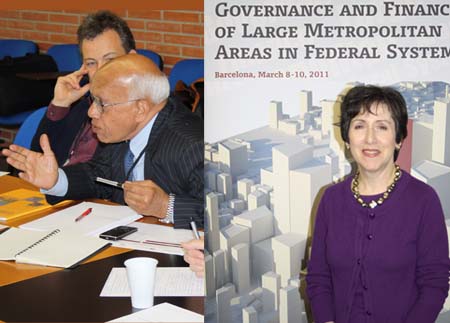 The Forum of Federations in partnership with the Metropolitan Region of Barcelona (Metropolitans de Barcelona) organized a two day comparative conference on the Financing and Governance of Metropolitan Regions in Federal Countries on the 9th and 10th of March 2011. The event was hosted by the L’Institut d’Economia de Barcelona at the University of Barcelona. The event brought together experts from eight countries including Australia, Brazil, Canada, India, South Africa, Switzerland, Spain, and the United States. Country presentations were made around a previously developed template. The experience of each country was presented through the case study of two differing metropolitan areas. These included:

Some interesting issues and questions emerged from the discussion over the two days that will be reflected in a comparative volume to be co-edited by Enid Slack and Rupak Chattopadhyay. The issues that the conference reflected on included:
1. The importance of metropolitan areas as the generators of economic wealth in their country.
2. The issue of why the federal government should be involved in large cities and metropolitan areas is it simply because they have the money or because of the growing economic importance of cities or some other reason?
3. How large can a metropolitan government be? If it becomes too large will it result in competition with state/provincial governments? Has that happened in some countries?
4. Should metropolitan authorities focus on specific functions (e.g. water district, transit district) or be multi-purpose governments?
5. Which approach is preferable — amalgamation or the creation of inter-municipal agreements?
6. Should representation on metropolitan bodies be indirect or direct?
7. Does the structure being used result in taxation without representation?

Presentations from the conference can be found below: