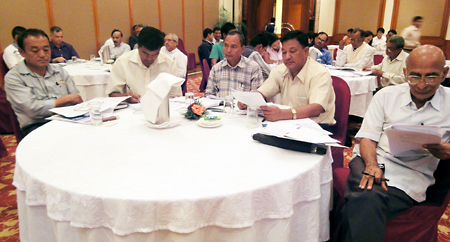 Nepali participants ponder key fiscal challenges that the country will soon have to tackle.

Creating a federal system from scratch in Nepal requires a new system of distributing government revenues and possibly even granting new powers of taxation to the provinces, which have not yet been created.

To help in this process, the Forum recently brought Dr. Dinesh K. Srivastava, a leading Indian fiscal federalism expert, to Nepal to assess the current state of debate in Nepal on fiscal federalism and discuss with stakeholders several key fiscal challenges that the country will have to soon tackle in its transition to becoming a federal system.

Nepal is transforming, going from a centralized monarchy to a federal republic. In May 2010, the country’s three major parties agreed to extend by one year the time allocated to the Constituent Assembly to complete the draft of a new constitution and to form a national unity government of the three largest parties.

In this context, Dr Srivastava met with representatives of existing government ministries and agencies, and experts to discuss the current state of fiscal arrangements in Nepal, the challenges Nepal’s economy is facing today as well as the general state of readiness for the transformation to a federal structure.

The meetings were held with: the Ministry of Finance, the Office of the Auditor General, the Central Bureau of Statistics, the Local Bodies Fiscal Commission, members of the Constituent Assembly Committee on Natural Resources, Financial Rights and Revenue Sharing, and individual experts.

The Nepali officials and Dr. Srivastava discussed four major challenges facing the country during the transition:

Dr. Srivastava shared his findings and observations with program stakeholders during two round-table discussions. The first roundtable, titled Fiscal Federalism in Nepal: Transition Challenges, was held on Aug. 12, 2010, in Kathmandu and organized in collaboration with the Nepal Constitution Foundation.

About 55 participants took part in the roundtable discussions, including political leaders, Constituent Assembly members, ministerial secretaries and joint secretaries from various ministries, national experts, members of civil society and academia. The roundtable, which lasted more than three hours, included a presentation by Dr Srivastava followed by an open discussion.

During the presentation Dr Srivastava spoke about the objectives and basic features of fiscal federalism; he then explored the proposal made by the Constituent Assembly Committee on Natural Resources, and further identified five key fiscal challenges that the country will need to tackle in the transition to a federal system, namely:

According to the participants, the roundtable discussion helped them better understand key concepts of fiscal federalism, including the imbalances among provinces and between the provinces and central government and how to reduce them, as well as think about the transitional challenges Nepal will have to face during the transformation to a federal structure and the lessons that can be learned from the experiences of other federal countries.

The second roundtable was organized for the business community people at the request of and in collaboration with Mr. Mahesh SJB Rana, the president of Corporate Forum Nepal. The roundtable, titled Designing Fiscal Transfers in Nepal: Some Lessons from Selected Federations (Canada, Australia, India), was held on Aug. 13, 2010, in Kathmandu. Twenty-nine representatives from the business community took part in the discussion.

In the roundtable, Dr. Srivastava spoke about the basic features of fiscal federalism, the impact of a federal structure on the economy, imbalances among the provinces and between the provinces and the central government and the mechanisms to correct them, citing examples from Canada, Australia and India.

Dr. Srivastava concluded by demonstrating the economic costs and benefits to Nepal of becoming a federal country. According to Dr. Srivastava, federalization will increase infrastructure, connectivity and put additional purchasing power in the hands of poorer households. It will increase demand for goods and services, broaden the tax base and lead to higher employment. As a result, a new federal system will lead to economic growth and a stronger economy and better regional balance.

The Forum’s three-year program in Nepal is funded by the Swiss Development and Cooperation Agency (SDC), which aims to assist the country in building its capacity to develop and implement a federal democratic system.