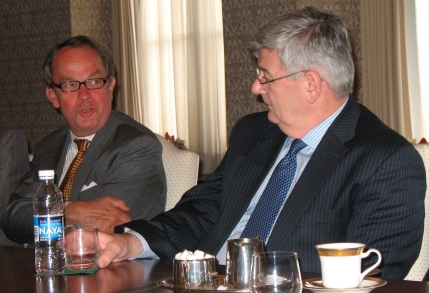 From right: Joschka Fischer; Forum of Federations President George Anderson; at a roundtable discussion with Canadian Members of Parliament before Fischer’s speech

Former German Foreign Minister Joschka Fischer attracted a crowd of more than 400 at a speech organized by the German Embassy and the Forum of Federations on May 15, 2007, in Ottawa. Fischer, the former leader of the German Green Party in the previous Social Democratic Party-Green Party coalition, spoke on the future of European integration and transatlantic relations.

« When the Berlin Wall came down in 1989, there was a huge explosion of joy that wee’ll never again experience in our lifetimes, » Fischer told the audience gathered at the National Gallery of Canada. And that moment of joy was followed by another joyful event – the enlargement of the European Union to 25 member states.

But the rejection of the proposed constitution for the European Union was a real setback, Fischer said. This failure puts Europe at a disadvantage when it comes to changes that will soon take place, such as the emergence of India and China as economic superpowers, developments that « will completely change the world in your lifetimes, » he added. Europe, which is an economic power, must become a true political power if it is to play a role in this new world, Fischer said.

In the Middle East, Fischer said that the war in Iraq was all but lost, and so the next U.S. President will have to disengage very quickly. Europe could help in bringing peace to the Middle East, he maintained. The solution should be peaceful, such as the one British Prime Minister Tony Blair helped bring about in Northern Ireland. In Afghanistan, the situation was different, he said, and it was crucial for NATO to help fight and defeat the Taliban.

Fischer left the world of German politics in 2006, and is now a guest professor at the Woodrow Wilson School of Public and International Affairs at Princeton University.