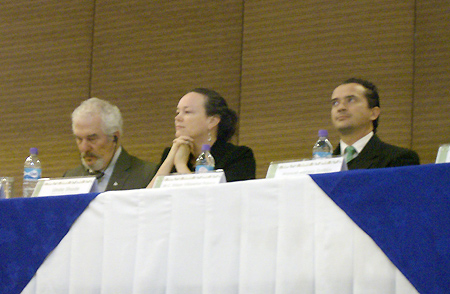 Panelists exchange with workshop participants. They are Manuel Barrera Guillen, ( right), Secretary of Ecology and Environmental Protection, of the Mexican state of San Luis Potosi. Linda Schade (centre), of the Center for Climate Change Strategies, United States; and Peter Globensky (left), formerly of the Council of Canadian Ministers of the Environment.

Once the smog capital of North America, Mexico City was recently recognized internationally for its climate change action plan and its advances in containing the growth of greenhouse gas emissions.

The full story of Mexico City’s ongoing transformation was told at a Forum workshop on March 19, 2010, by 30 practitioners of federalism from Mexico’s federal government and the government of Mexico City.

Mexico City’s advances came from innovations such as its long-standing program that limits automobile traffic, as well as to the more recent aggressive expansion of affordable public transit (new subway lines, metrobus, trolleys and tramways).

The city’s emissions reduction strategy has also involved the co-operation with neighbouring cities and states, as much of the pollution is generated by industries just outside the city limits. Mexican practitioners welcomed the opportunity to exchange experiences with experts from Canada and the United States.

Experts who presented at the workshop included:

Two days earlier, in the state of San Luis Potosi, about 70 practitioners from Mexico’s federal government and the state and municipal governments gathered to and discussed how the subnational governments can act as laboratories for developing innovative policies, many of which can then influence regional and federal policy.

That was a key message that aroused interest in the March 17, 2010 workshop, organized by the Forum of Federations with, Mexico’s National Institute for Federalism and the Department of Ecology of the State Government of San Luis Potosi.

At the event, participants examined the role of municipal and state and provincial governments in developing climate change action plans, both to complement and enhance national climate change policies.

In San Luis Potosi, a state of 2.5 million located to the north of Mexico City, the greatest threats from climate change are the resultant droughts and, paradoxically, flooding during the rainy season. The state is currently doing studies to predict how climate change is expected to affect its agriculture and forestry industries. The state is committed to developing an active strategy to both mitigate and adapt to the effects of climate change, and welcomed the opportunity to exchange experiences with practitioners from Canada and the United States.

Experts who presented at the workshop included:

Two experts presented at both Mexican events, Peter Globensky, former Executive Director of the Council of Canadian Ministers of the Environment; and Linda Schade, Director of Programs and Development, Center for Climate Change Strategies (USA).

Mr. Globensky listed the successes of Canadian provinces in working together to co-ordinate environmental management policies such as harmonization of assessment, air quality standards, as well as means of handling dioxins and mercury emissions. However, because of competing interests and a yet-to be-articulated national strategy, Canadian provinces have been less successful in co-ordinating a coherent climate change policy framework.

Ms Schade described how her organization has worked with more than 20 state governments to develop climate change action plans. Engaging directly with the Governors and State Environment Secretaries, the CCS brings together stakeholder groups, and government officials to develop emission inventories and forecasts, policy options, and related economic analysis and modeling. This successful example was of great interest to workshop participants, as each step involves consensus building and addresses the macroeconomic impact of each of the available policy options.