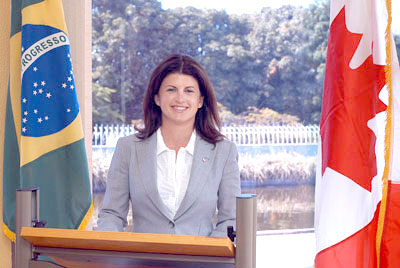 Canada’s Minister of Intergovernmental Affairs, Rona Ambrose, speaks to a roundable on federalism in Brasilia on July 17, 2007. (Photo courtesy of the Canadian Embassy in Brazil)

Minister’s visit focuses on federalism
The Honourable Rona Ambrose, Minister of Intergovernmental Affairs for Canada, recently carried out a working visit to Brazil, the largest federation in South America, during which issues of federal governance were a key topic – issues such as intergovernmental relations, fiscal federalism and enhancing public security in federal countries.

The Minister’s mission to Brazil was from July 13 to 18, 2007. Her schedule included a speech to participants of a roundtable on federalism, an address to members and guests of the AssociaÃ§Ã£o Comercial de Santos on the flow of revenues from natural resources to governments under the Canadian federal system, a meeting with ambassadors of other federal countries accredited to Brazil as well as meetings with dignitaries of several other Brazilian cities.

As she was part of a Canadian delegation to Brazil led by the Governor General, The Right Honourable MichaÃ«lle Jean, the Minister had an opportunity to meet privately with Brazilian President Luiz InÃ Â¡cio Lula da Silva.

David-Alexandre Mac Donald, the Director of Partnerships with the Forum of Federations, liaised with the Canadian missions in Brazil in the organization of her schedule and accompanied the Minister’s delegation during all the activities.

The Forum has done considerable work in Brazil since 2000, providing it with a number of international experts in fiscal federalism to share ideas on how to sort out and enhance its taxation and fiscal policies.

In her address to the participants of the roundtable on federalism, which was hosted by the Instituto de Pesquisa EconÃ´moca Aplicada (IPEA), Minister Ambrose said: ‘The common denominator in federations that work is that they use federalism not as an end in itself, but rather as a tool to respect diversity and to find effective ways to serve citizens.’ She further commented that: ‘We have an interest in knowing each other better. Sharing our experience of federalism is certainly one way of learning from each other.’

Mr. MacDonald of the Forum facilitated meetings for the Minister with key Brazilian officials and institutional partners with whom the Forum has worked. These included Dr. Vicente Trevas, Deputy Minister for Federal Affairs within the Presidency, and Professor Fernando Rezende, of the Getulio Vargas Foundation. Meetings with them touched on matters of fiscal federalism, local governments and metropolitan regions in federal countries.

Brazil, with a population of 180 million, is characterized by extreme contrasts between its poor and wealthy regions and the challenge faced by Brazil’s three orders of government – the central government, the states and the cities – is to ensure that their fiscal policies enable the poor regions to provide basic services to the public.

Ms Ambrose used the occasion of her meeting with ambassadors of Australia, Austria, Belgium, Germany, India, Mexico, Nigeria, South Africa and Switzerland to discuss the issues to be addressed at the Fourth International Conference on Federalism scheduled to take place in New Delhi between November 5 and 7, 2007. It is expected that 1,000 participants will attend from as many as 100 countries.