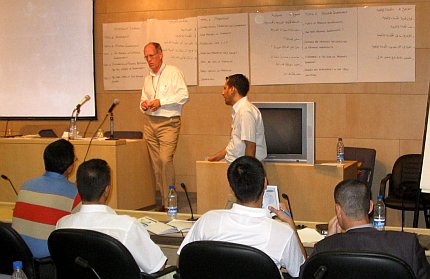 The Forum of Federations has begun the first phase of its governance work in Iraq by teaching federalism to Iraqi journalists in a project that aims to help establish a viable federal government in that troubled country.

During the 11-day mission to Baghdad, Professor David Cameron, an expert in federalism, delivered three days of federalism training to about 25 Iraqi journalists and regional media representatives.

The purpose of the mission was also to strike a partnership with Iraqi academics in order to develop a university course on federalism.

The main aim of the project is to provide educational support to about 50 Iraqi teachers and academics so that they can design and offer courses on federalism, in Arabic and Kurdish, to Iraqi post-secondary students and establish themselves as an indigenous group of scholars whose shared interest and concern is Iraq’s evolution as a democratic federation.

The two-year $2 million Iraqi project is funded by the Canadian International Development Agency.

The Forum will return to Amman Jordan next month and several times in 2007 to continue its work with Iraqi academics in law and political science.

Earlier this year, a delegation of prominent Iraqis came to Canada and Switzerland in a study tour organized by the Forum of Federations in partnership with the National Democratic Institute and the Government of Switzerland. The Forum also sent a total of six experts to Iraq to provide advice on constitutional development in the run-up to the December 2005 elections.