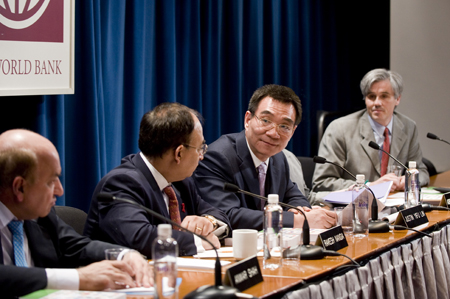 The Chief Economist of the World Bank, Justin Yifu Lin, centre right, says the Forum’s book will have an important impact on the debate on fiscal federalism.

The World Bank has officially launched the fourth book in the Forum of Federations’ Global Dialogue series, titled The Practice of Fiscal Federalism: Comparative Studies.

The chair of the launch was Justin Yifu Lin, Chief Economist and Senior Vice President at the World Bank. He predicted that the book will have an important impact on the federalism debate.

The launch occurred at the Bank’s headquarters in Washington, D.C. About 40 people, World Bank staff and others, attended the event on April 14, 2008.

The aim of the Global Dialogue series is to bring together experts from around the world, to engage in comparative debate regarding the core themes and issues of federalism, in order to establish an international network of knowledge and shared experiences.

The book was edited by Anwar Shah, lead economist and program leader with the Public Sector Governance group at the World Bank Institute.

Mr. Shah said in his comments that federalism is not without its challenges. Mr. Shan explained that until fairly recently, the dominance of statist ideologies has meant that attention has rarely been focused on the potential benefits of federalism. As such there is little information, research data or practical experience on the subject, other than that detailing the problems facing a small number of fledgling federal democracies. This book aims to go some way towards filling the gap in that knowledge.

The World Bank and the Canadian International Development Agency provided important support for the book.

Producing the books is a complicated task: it involves about a dozen roundtable meetings in the 12 countries included in the book, as well as an international conference where the coordinators of the 12 countries meet to fine-tune their respective chapters.

Mr. Raoul Blindenbacher, the former vice president of the Forum’s Global Dialogue Program, explained the process at the Washington launch. Mr. Blindenbacher is now an adviser at the Bank.

Federalism is not a solution for all countries, and has its drawbacks. Adrienne Cheasty of the International Monetary Fund, said that drawbacks relate to macro-management, and can include excessive sub-national borrowing, and insufficient revenue sharing. She also insisted upon the need for proper incentives for all orders of government, such as hard budget constraints, data collection, communication and reporting in sub-national governments, in order to minimize the risk to macroeconomic stability.

On a more upbeat note, Mr. Lin said at the launch, that fiscal federalism allows for better knowledge of local needs and constraints noting that it is important to remember that what works in one country may not necessarily be relevant to another but that it allows for growth with equity. Mr. Lin was flanked to the left by Rakesh Nangia; the acting Vice President of the World Bank Institute (WBI); extreme left by Anwar Shah, the Lead Economist at WBI; and to the right by Raoul Blindenbacher, Advisor at WBI and a former Vice President at the Forum of Federations.

It was Mr. Lin’s first public appearance in his new role as Chief Economist and Senior Vice President at the World Bank. He is the first Chief Economist appointed to the post from a developing country. He is outranked only by Bank President Robert Zoellick.