In mid-February, the Forum participated in a 3-day retreat organized with the Southern Kordofan Popular Consultation Preparatory Committee to discuss the federal dimension of intergovernmental relations and power sharing between the center and the state. The process of â€œPopular Consultationsâ€ in Southern Kordofan state, as well as in Blue Nile, is a lesser known but critical element of the Comprehensive Peace Agreement (CPA) that has the potential to influence governance arrangements in Sudan after the secession of the South in July, 2011. The retreat was the first stage in the Forumâ€™s ongoing program to assist Popular Consultation leaders in both states to develop practical tools on key intergovernmental issues at stake in center-state relations, crucial themes such as power sharing and political accommodation; wealth sharing and management of petroleum revenue; land use; and cultural and social rights were discussed. As frontline, border states in the North-South conflict of 1983-2004, Southern Kordofan and Blue Nile are in many ways a microcosm of this war, with parts of their populations siding with the Sudan Peopleâ€™s Liberation Movement/Army and others with the government in Khartoum. Both areas remain rife with tensions and face pressing security, reconstruction and development needs. In recognition of their centrality to the conflict, both states were dealt with separately during the 2005 CPA. Southern Kordofan and Blue Nile were granted a degree of subnational autonomy, and the right to hold a â€˜popular consultationâ€™ on the outcomes of the CPA. The Southern Kordofan Preparatory Committee is a politically diverse body comprised of 66 senior state leaders, including Governor Ahmed Haroun, Deputy Governor Abdel Aziz, Dr. Adam Al-Faki, General Secretary of the Southern Kordofan Council of the Wise, and Ibrahim Balandiya, Speaker of the Southern Kordofan Legislative Assembly. The Committee is working to prepare the ground for a formal Commission to be established following coming state by-elections scheduled for April, 2011. Representing the Forum were Dr. Jaap de Visser of the Community Law Center at the University of Western Cape, South Africa and Dr. Juan Antonio Zapata, an economist and fiscal federalism expert with Zapata & Consultores Asociados of Argentina. They were joined by Hassan Ibrahim, a constitutional lawyer from South Africa; Professor Leif Manger of the University of Bergen (both with the Geneva-based Center for Humanitarian Dialogue), Gerry McHugh, president of US-based Conflict Dynamics International, and Sudanese scholars from The University of Khartoumâ€™s Peace Research Institute (PRI). The retreat was organized under auspices of AECOMâ€™s USAID-funded Sudan Transition and Conflict Mitigation Program. The retreat participants concluded that these popular consultations could be used as an opportunity to reassess the governance structures and review alternative power and wealth sharing arrangements for the stateâ€”particularly around the role that federal institutions, solutions, and options play in forming the basis for future negotiations with the central government. The overall aim of the Forumâ€™s popular consultation program is to provide technical advice to leaders in both states, as well as Khartoum, to implement the popular consultations findings into a set of coherent policy options to inform subsequent dialogues and negotiations. The event was part of the Forumâ€™s project on â€˜Support to Federal Decentralization Policy and Negotiations in Sudanâ€™ funded by the Canadian Government. 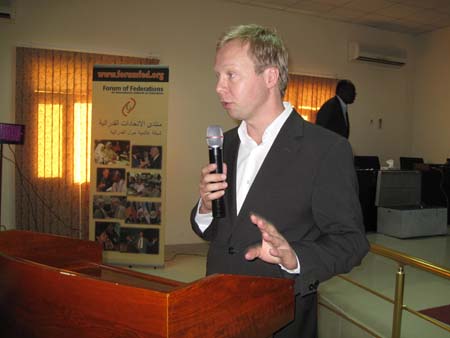 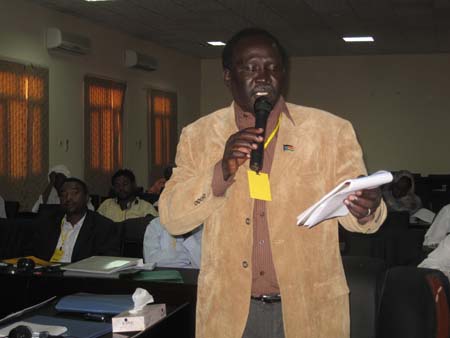 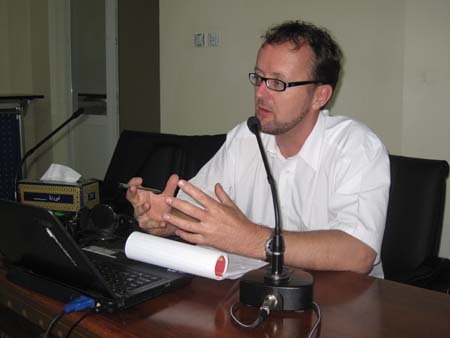 Dr.Jaap de Visser from the Forum of Federations / University of the Western Cape