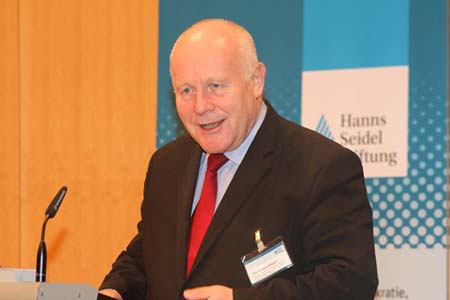 Mr. Georg Milbradt, Chairman of the board of the Forum of Federations.

On November 3-6, 2013, the German Hanns Seidel Foundation organized "The 2nd Wildbad Kreuther Federalism Days” bringing together decision makers from South- and Southeast Asia and Europe to discuss intergovernmental relations in established and emerging federations in the region. The three-day conference focused on the areas of division of responsibilities, fiscal federalism and conflict resolution.

The Hanns Seidel Foundation (http://www.hss.de/english.html) is one of Germany’s five political foundation. It is affiliated with the Christian Social Union (CSU), the Christian Democrats’ sister party in Bavaria.

As key-note speaker, the foundation invited the Chairman of the Forum, Prof. Georg Milbradt, former Premier of the German province of Saxony. Prof. Milbradt delivered his key-note on the challenges of reforming fiscal federalism in Germany at the academy of the foundation in Munich, Bavaria.

The current German system of vertical and horizontal equalization needs to be reformed during the upcoming legislative period. The so-called “Solidarity Pact II”, which provides financial support to the East German LÃ¤nder, phases out in 2019 and the pact is closely tied to the equalization mechanism.

There has been some political posturing already. Currently, only three LÃ¤nder – Bavaria, Baden-WÃ¼rtemberg and Hesse – pay into the (horizontal) equalization mechanism, while all the other 13 LÃ¤nder are net beneficiaries. Bavaria and Hesse have already submitted an appeal to the Constitutional Court, arguing that the current system is unconstitutional. Since the reform of fiscal federalism needs to passed by both chambers the Bundestag and the Bundesrat many argue that only a “Grand Coalition” of Germany’s two biggest parties (Chancellor Angela Merkel’s CDU and the Social Democratic Party) can manage to find a compromise. The two parties are currently negotiating a coalition. Germany held federal elections on September 22, 2013.