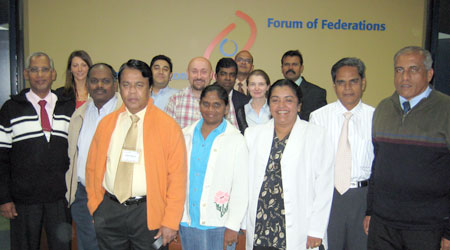 Sri Lankan study tour participants at the Forum of Federations offices in June 2007.

The Forum of Federations, in collaboration with World Vision Canada, hosted a 12-person delegation composed of Sri Lankan senior government officials, members of civil society and project staff from World Vision on a study tour to Canada from June 20 to 29, 2007. The tour is part of the Rural Integrated Water, Sanitation and Hygiene (RIWASH) project implemented by World Vision in the Eastern province of Sri Lanka. The aim of the project is to enhance the capacity of local governments in Sri Lanka to facilitate and support the implementation of sustainable community-based water, sanitation and hygiene systems.

During the tour, participants learned about the Canadian system of federal governance, and the mechanisms which facilitate the management of a diverse, multicultural and multilingual society such as Canada. Participants also studied the Canadian approach to intergovernmental relations, devolution of power to provincial and municipal governments and Canada’s official languages policy, among other things. Particular emphasis was placed on the sharing of responsibilities for service delivery within the Canadian federal framework. The study tour was divided into two parts. A Western Canada portion in Vancouver and Kelowna, British Columbia was managed by World Vision. A Central Canada portion including Ottawa, MontrÃ©al, QuÃ©bec City and Toronto was organized and managed by the Forum of Federations with participation of the World Visione’s representatives.

Irina Shmakova, the Forum’s program officer for Asia-Pacific, coordinated the organization and logistics of the study tour.