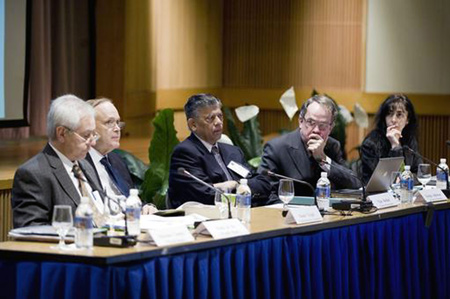 The Forum of Federations co-organized with the World Bank a conference on Oil and Gas in Federal Systems, which took place at the Bank’s headquarters in Washington, D.C. on March 3 and 4, 2010, with the sponsorship of Norad, the Norwegian Agency for Development Assistance.

The conference, attended by about 100 participants, was opened by the Forum’s new chairman, Dr. Vijay Kelkar, who recently completed his assignment as Chairman of India’s Thirteenth Finance Commission; and by Dr. Otaviano Canuto, the Vice President of the World Bank for poverty reduction and economic management.

Experts prepared book chapters on 12 countries. They participated in panels with experts from the Bank, the International Monetary Fund, key non-government organizations and universities. The panels dealt with the following issues: ownership and control, macroeconomic management, fiscal decentralization, revenue-raising and sharing, and accountability and transparency.

In addition, Dr. Peter Cameron of Dundee University spoke on the situation in Iraq, a federation, as it pertains to that country’s oil and gas management; and Mr. Nicholas Haysom, Director of Political Affairs in the Office of the UN Secretary General, spoke on lessons learned in negotiating oil and gas arrangements in conflict afflicted countries.

After the conference the authors stayed on to discuss the preparation of a major volume on the subject which should be published next winter. The conference presentations and the draft country papers have been posted on the websites of the Forum and the World Bank. The Forum will hold workshops in a number of countries on this issue over the coming year.