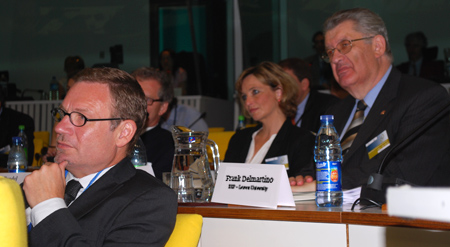 Michael Schneider of the EU Committee of Regions (left), Petra Bendel of the Central Institute for Regional and Area Studies, and Frank Delmartino of Leuven University ponder the question of diversity at the Forum’s international roundtable in Brussels.

The Forum of Federations organized an international roundtable on "Unity and diversity in federal countries » in Brussels recently in partnership with the European Union’s Committee of the Regions. The roundtable, the seventh in the Global Dialogue series, brought together participating experts from Australia, Belgium, Brazil, Canada, Ethiopia, Germany, India, Nigeria, Russia, Switzerland, Spain, and the United States.

1. What do social solidarity and collective responsibility mean in federal systems?
2. Is a three-tiered federation composed of a central government, regions and municipalities successful in effectively promoting the recognition, remedying and upholding of diversity and in reconciling it with the suppression of socio-economic inequalities?
3. To what extent are constitutional silences and ambiguities, or the political avoidance or deferment of sensitive regional issues, viable strategies (even in the short-term) for sustaining unity in diversity in deeply divided societies?
4. If federalism is designed to accommodate territorially-based communal groups, then which groups have legitimate claims to have their own constituent states or provinces? Once such states are created, do they have an inherent right to exist in perpetuity?
5. Are regional political parties diversifying agencies or unifying forces in federal democracies?
6. How can one build legitimate and inclusive institutions in multiethnic societies, particularly when all the different groups taken alone at the federal level are all minorities?
7. In Canada, relations between the center and the provinces is focused on direct bargaining between the executives of both orders of government; in other federations there is much more emphasis on accommodation within central institutions such as the upper chamber. What are the consequences of these two different patterns?
8. What role do power-sharing arrangements which involve second chambers play for the management of diversity?
9. How should the federal system adjust to demographic changes affecting ethnic composition of « ethnic » regions and thus their legitimacy?
10. Have shifts in the conceptualization of internal diversity and cultural differences taken place with the increase of immigration? Do national or regional identities feel threatened by new minorities?
11. Under what demographic, social and other conditions are territorial or ethnic autonomy arrangements both viable and helpful to indigenous peoples?
12. Should the rights of minorities be protected mainly by the constituent units such as provinces or states or through federal legislative or constitutional provisions?