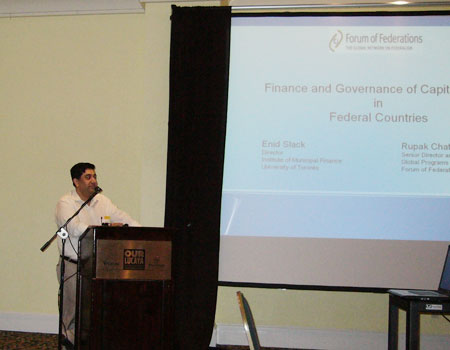 Rupak Chattopadhyay, the Forum’s Senior Director of Global Programs, presents the organization’s work on local and metropolitan governance at a conference on local government in Freeport, Bahamas.

The conference highlighted best and emerging practices in local government, with case studies on successful local government projects in Grand Bahama the fourth largest island in the Bahamas.

Mr Chattopadhyay, the Forum’s Senior Director of Global Programs, presented the organization’s work on local and metropolitan governance including a paper on Financing and Governance of Capital Cities in Federal Countries.

The paper and related research will be published in a book co-edited by Mr. Chattopadhyay and Enid Slack, Director of the Institute of Municipal Finance at the University of Toronto.

Issues of particular interest that emerged at the event included discussion of ways to compensate municipalities which assume capital city functions, and how democratic accountability works in capital cities under the federal district model.

A federal district is an administrative division of a federation that is directly controlled by the central government. For instance, Washington, D.C. is such a federal district.

The colloquium was co-organized by the University of Technology Sydney and the International Development Research Centre a corporation established and regulated by the Canadian government – in partnership with the Commonwealth Local Government Forum. The conference took place from May 11- 14, 2009.