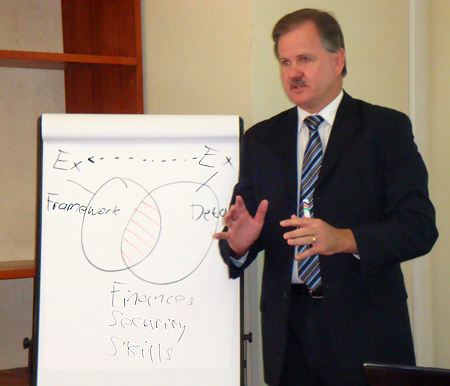 There is much to be learned from how other federations manage conflict issues, Dr. Bertus de Villiers explains at recent Ethiopian roundtable event.

The Forum recently held a Practitioner’s Roundtable in Addis Ababa to prepare for its two-year conflict-management project in Ethiopia.

The event was led by Dr. Bertus de Villiers, a member of the State Administrative Tribunal of Western Australia; and national expert Dr. Asnake Kefale.

The March 11, 2010, event was attended by the Forum’s local partners including representatives from Ethiopia’s House of Federation, Ministry of Federal Affairs, and Institute of Federal Studies, as well as officials with international and national NGOs. It was chaired by the Forum’s Africa Director, Shawn Houlihan.

Among the issues discussed were the settlement of border disputes in South Africa, India, Nigeria and Switzerland and whether the process satisfies different stakeholder groups in those countries. Other issues included the influence of the political party system on the practice of federalism and the conflicts that fiscal issues can create in federations, including Ethiopia.

South Africa had a provincial demarcation commission which had responsibility to invite public submissions and to make recommendations on the demarcation of the provinces on the basis of a set of criteria provided to it by the constitutional assembly. (Demarcation is a term that refers to the setting or marking of boundaries.)

The roundtable, held at the Forum’s Ethiopian office, was part of a broader consultation process in preparation for the Forum’s two-year project on Conflict Management in Federal Systems: Mobilizing Ethiopian Leadership, funded by the German Foreign Ministry.

Feedback from the roundtable consultation will be incorporated into the design of the project to ensure that topics covered and case studies in the Forum’s project will be relevant to the practical realities faced by Ethiopia’s leaders.

Ethiopia, which became a partner country of the Forum of Federations in December 2006, renewed its partnership in December 2009. It is to host the 5th International Conference on Federalism on Dec. 2-4, 2010.