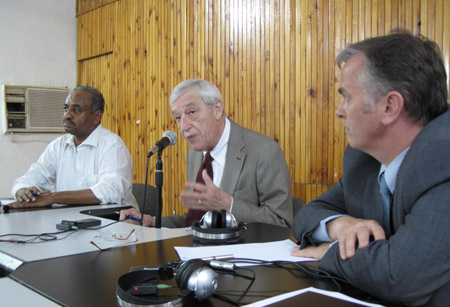 Richard Simeon, a Forum federalism expert and professor emeritus of political science and law at the University of Toronto, was awarded the 2010 Daniel Elazar Distinguished Federalism Scholar Award from the American Political Science Association.

The prestigious award is recognition of his lifetime contribution to the study of federalism and intergovernmental relations.

Previous winners of the award include Prof. Ronald Watts, one of the founders of the Forum of Federations; Nobel Prize winner Prof. Elinor Ostrom of Indiana University and Prof. Daniel Elazar of the University of Pennsylvania, after whom the award was named.

Prof. David Cameron, a board member of the Forum and a colleague of Prof. Simeon at the University of Toronto, said: "I’m thrilled that Richard Simeon has won the Elazar Prize. He is a splendid scholar and student of federalism and a dear friend since we were teenagers growing up together in Vancouver.”

Prof. Ron Watts of Queen’s University joined in the congratulations. "I’m delighted at the recognition by the APSA of Richard Simeon as a Canadian who over his career has made an enormous contribution to the understanding of the operation of federalism in different countries,” Prof. Watts added.

In addition to scholarly work on federalism, Prof. Simeon has participated in a number of activities abroad providing his expertise and guidance to countries in the process of adopting a federal system.

In the last two years, Prof. Simeon traveled four times to Sudan for the Forum, where he designed and delivered an academic program for senior academics and policy makers in Sudan.

Most recently he presented at a policy workshop for senior Sudanese leaders to assist them in exploring options for future institutional arrangements as the country engages in a critical process of transition. (In six months a referendum will be held in South Sudan which could lead to the region’s independence.)

In 2007 and 2008, he was one of the Forum’s key experts in its training program for Iraqi academics. In February 2007 Prof. Simeon participated in a conference organized by the United Nations Assistance Mission to Iraq Office for Constitutional Support.

He is currently a member of a Forum project to assemble and create a body of literature on federalism and conflict management, with funding from the United States Institute of Peace.