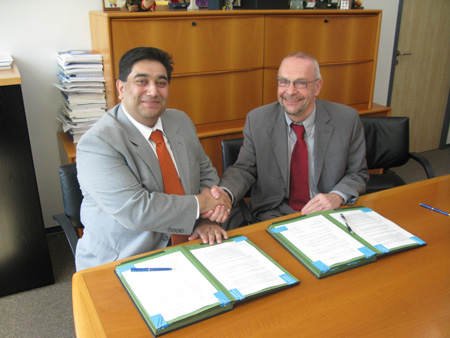 Forum Vice-President Rupak Chattopadhyay, left, shakes the hand of Gerhard Stahl, the Secretary General of the Committee of the Regions (CoR), a key body of the European Union, at a signing ceremony between the Forum and the CoR.

The Forum recently signed a Memorandum of Understanding with the Committee of the Regions (CoR) of the European Union providing for the two organizations to jointly implement a variety of activities.

The two bodies, which have worked closely together in the past, formalized their relationship with a view to building even stronger links.

The CoR is the political body that provides the regional and local levels of European Union (EU) member-states with a voice in EU policy development and legislation.

As a result of the agreement, signed June 15, 2010, the Committee of the Regions will participate in the Forum’s thematic programs, notably on the themes of Immigrant Integration in Federal Systems and on Metropolitan Governance.

The Forum’s planned program for its metropolitan governance work will potentially feed into the next summit of the Committee of the Regions, to be held in Copenhagen in 2012, which will have a focus on urban issues.

The Forum and the European body also agreed to co-organize a high-level conference in Canada on the impact of globalization and federalism. It is expected that joint publications will be put out for all activities in which the two organizations collaborate.

The relationship with CoR will provide the Forum with the opportunity to reach out to a European regional audience, and to form part of important European policy discourses.

The Committee of the Regions is a key entity. The EU’s high-level bodies the Commission, Parliament and Council are obliged to consult the Committee whenever new laws or regulations are proposed in areas that affect regional or local levels of government of member states.