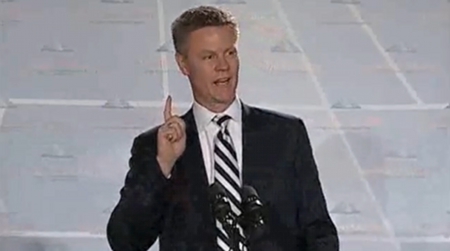 Dr. Vijay Kelkar, Chair of the Board of the Forum, is pleased to announce that Mr. Ken Boessenkool was elected a board member on September 2, 2010. He is replacing Professor David Cameron, the chair of the University of Toronto’s Department of Political Science, who is stepping down after eight years on the board.

Mr. Boessenkool is an Executive Fellow at the School of Public Policy at the University of Calgary and provides Senior Counsel through the communications firm, GCI Canada.

He has played formal advisory roles to Prime Minister Stephen Harper when he was in opposition; to Stockwell Day when Mr. Day was a provincial cabinet minister in Alberta; and to Preston Manning, the former leader of the federal Reform Party.

The new board member has authored more than 40 policy papers in the last 14 years for a number of Canadian institutes and think tanks including the C.D. Howe Institute, the Atlantic Institute for Market Studies, the Institute for Research on Public Policy, the Canada West Foundation and the School of Public Policy, University of Calgary.

Mr. Boessenkool is a volunteer board member of the Canada-Israel Committee, the Cantos Music Foundation and Canadian Friends of the Hebrew University. Mr. Boessenkool has an undergraduate degree from the University of Lethbridge and a graduate degree in economics from the University of Toronto.
Dr. Kelkar thanked Professor Cameron for his exceptional work with the Forum, both as a board member and as an expert active in the Forum’s programs in various countries. He is pleased that Dr. Cameron will continue to chair the board’s program committee.