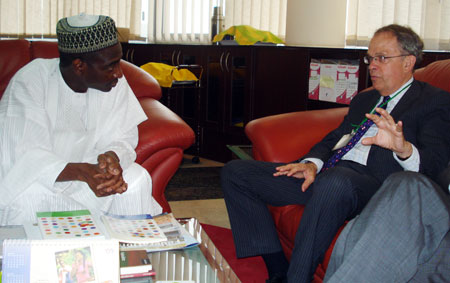 A Forum delegation led by President George Anderson met with Nigerian ministers and other senior officials in Abuja recently to discuss the state of federalism in Nigeria and the Forum’s program work there.

The Forum group held meetings with Ojo Maduekwe, Minister of Foreign Affairs; Dr. Mansur Muhtar, the Minister of Finance; Mr. Mahmud Yayale Ahmed, Secretary to the Government of the Federation; Engr. Hamman Tukur, Chairman of the Revenue Mobilization, Allocation and Fiscal Commission; Senator Ike Ekweremadu, Deputy President of the Senate, among others.

Mr. Maduekwe, the Foreign Affairs Minister, observed that "the only thing that has brought this country to crisis and shaken us to our very foundation was when federalism was abandoned or disputed as in the civil war”.

The Nigerian Civil War occurred from 1967 1970 when the southeastern provinces attempted to secede, claiming to be a republic.

Deputy Senate President, Senator Ike Ekweremadu, met with the Forum officials to discuss Nigeria’s process of constitutional review. The senator said he supported plans for the Forum to hold an international roundtable on constitutional reforms in Nigeria early in the summer.

This project will be supported by the Canadian International Development Agency.

Mr. Anderson was accompanied on the mission by Shawn Houlihan, the Forum’s director for Africa, and Udo Jude Ilo, the Forum’s program manager in Nigeria.

Mr. Houlihan met the director general of Nigeria’s Governors’ Forum, Mr. Asishana Bayo Okauru, who voiced his support for the Forum’s planned programs in Nigeria, the most populous country in sub-Saharan Africa.

The Forum delegation’s visit, which took place from May 6 9, 2009, advanced plans for Forum activities in Nigeria including: