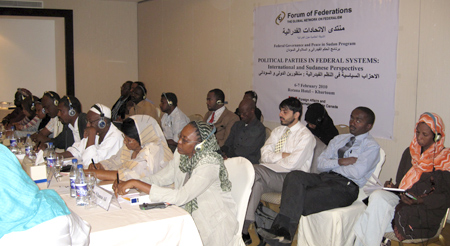 The Forum of Federations held a two-day seminar in Khartoum titled Political Parties in Federal Systems, International And Sudanese Perspectives for senior representatives of Sudan’s political parties to engage in dialogue on the essential role that parties play in federal countries, as well as the important part they play in advancing peace and development in Sudan.

Sudanese are slated to go the polls in April to elect a president and parliamentary representatives.

Participants at the Forum event discussed core federalism concepts, the Sudanese federal experience and the unique ways that political parties organize, compete and ultimately shape federal systems. The sessions generated critical dialogue around the nature of the federal party system in Sudan, strategies for reaching the party base, membership, federal solutions and cooperation among parties around issues of common interest.

The event included a series of additional sessions with officials of the main parties on Feb. 4, 8, 9 and 10, 2010, which were held at the offices of the Communist Party, the SPLM’s Khartoum State Northern Sector, the Umma Party and the Democratic Union Party.

The overall goal of the Forum’s Federal Governance and Peace program in Sudan is to strengthen of the capacities of the Sudanese to implement key federal components of the 2005 Comprehensive Peace Agreement and build the basis for a broader and deeper national understanding about the role of federalism for sustainable peace in Sudan.

The Forum program is funded by Canada’s Department of Foreign Affairs and International Trade.

The experts participating in the event were Dr. Sandeep Shastri, the Pro Vice Chancellor at Jain University in Bangalore, India and a professor of Political Science; and Dr. Marie Joelle-Zahar, professor of Political Science at the University of Montreal, who co-led the sessions. They were joined by their Sudanese colleagues, Dr. Omer Awadalla, Director of The Federalism Research and Capacity Building Centre and Dr. Abusin Ahmed of Partners in Development.