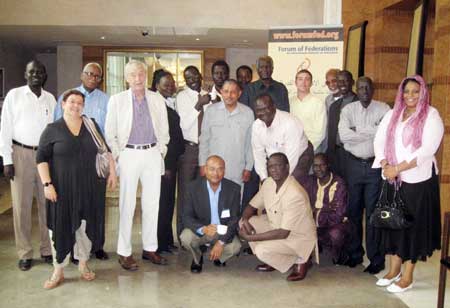 Participants and experts pause for a group photo at two-day federalism conference held in Khartoum.

The Forum held a recent workshop on â€˜Federalism: Comparative Theory And Practice’ in partnership with the University of Juba’s Centre for Peace and Development and the University of Khartoum’s Public Administration and Federalism Studies Institute.

The event took place in Khartoum from August 7-8, 2010. It included about 20 professors from the Universities of Khartoum and Juba, and other Sudanese universities.

The program included one day of presentations and discussions on comparative federalism theory and practice, and one day of practical dialogue on the role that federal tools can play in advancing peace and development in Sudan.

Presentations on secession experiences in federal countries – such as Canada, Ethiopia, India and Pakistan – generated spirited and lively debate around the complexities, implications and the critical outstanding issues surrounding the upcoming January 2011 Referendum on Self Determination for Southern Sudan.

Based on participant feedback, there was a general recognition that federal tools and alternatives will continue to play a vital role in the management of regional wealth and power sharing challenges – whatever the outcome of the referendum.

An international team of experts facilitated the event. The team included:

Mohammed Muktar, the Deputy Director of the University of Juba’s Peace and Development Center, moderated several of the sessions.

The workshop was part of the Forum’s ongoing academic support initiative in Sudan, which aims to deepen federalism knowledge and teaching, and to link the research expertise of academic institutions with political and civic leaders to enhance policy debates.

The Forum’s Federal Governance and Peace in Sudan program is funded by the Canadian Department of Foreign Affairs and International Trade.