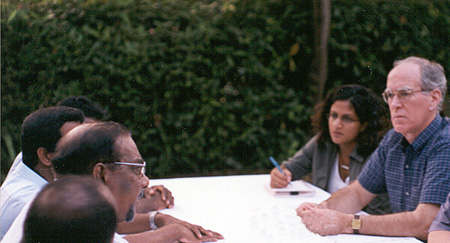 Forum Fellow David Cameron, (right) on one of his several missions to Sri Lanka, explaining the workings of federalism to local officials (2003).

David Cameron, the chair of the Forum of Federations’ program committee, has been named a Fellow of the organization.

The honour, which was awarded by the Forum’s board at its semi-annual meeting on Sept. 30, is the organization’s highest honour. It has gone to individuals who have played a significant role in the founding and development of the organization.

Other Forum Fellows include Professor Ron Watts, a founding director of the Forum and a worldwide authority on federalism; Bob Rae, the Forum’s chair from 2000 to 2005, its acting president in 2004-05, and a former Premier of Ontario and a current Member of Parliament; and Dr. Arnold Koller, a former President of Switzerland and chair of the Forum from 2005-2010.

"I am honoured to be placed in the company of such esteemed colleagues,” said Professor Cameron, who is also the chair of the Political Science Department at the University of Toronto.

Forum president George Anderson said "David Cameron has beenâ€”and will continue to beâ€”one of the Forum’s greatest resources, whether in helping with board governance, working abroad or advising on particular projects. His contribution is always marked by deep knowledge and great wisdom, tinged with a delightful sense of humour.”

Prof. Watts said he was delighted that the honour was bestowed on Prof. Cameron, for whom he has the "highest regard.”

Prof. Cameron was a member of a group that planned and discussed setting up the Forum.

"I now take great pride in the terrific work it is accomplishing,” said Prof. Cameron. Indeed, the Forum delivered 80 events and activities last year, its highest ever, in 17 countries, most of which are federal or have federal attributes.

The Forum was founded on the heels of the 1999 International Conference on Federalism in Mont Tremblant, Quebec.

It program committee oversees and helps shape the organization’s activities in its nine partner countries, in select countries with federal features, and in countries where the Forum carries out development assistance work.

Prof. Cameron has participated in the Forum’s development assistance work in Sri Lanka, and Iraq. He is no longer a Forum board member, but will continue heading its program committee until next year.

At the Sept. 30 Forum board meeting, two new members were welcomed aboard, Abay Tsehaye Abay of Ethiopia, and Senator Ramon Galindo Noriega of Mexico.

Earlier in September, Ken Boessenkool of Canada also joined the board.

The Forum’s next board meeting is scheduled for Dec. 12 in Ethiopia, before the commencement of the Fifth International Conference on Federalism, to be held Dec. 14-16.