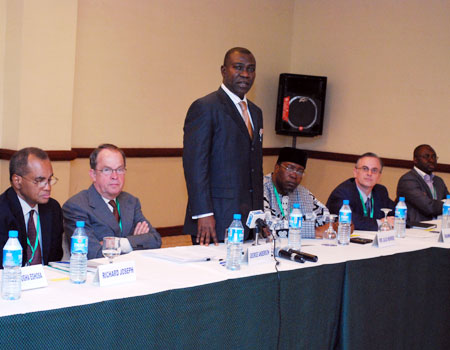 Participants at a recent Nigerian roundtable on constitutional reform listen to an address from Ike Ekweremadu (standing), the Deputy President of the Senate of the Federal Republic of Nigeria.

Nigerian and international federalism experts met in Abuja recently for a roundtable discussion on constitutional reform for the country, the most populous in sub-Saharan Africa.

The two-day event explored federal issues relevant to the current constitutional review in Nigeria. The roundtable was organized by the Forum in collaboration with the National Assembly of Nigeria.

A group of 35 Nigerian experts and five international counterparts took part, including Forum President George Anderson; Prof Julius Ihonbvere of Nigeria, a Forum board member and member of the Technical Committee on the Niger Delta; Richard Joseph, of Northwestern University and the Brookings Institute (USA); Rotimi Suberu, of the University of Ibadan (Nigeria) and Bennington College (USA) and Koller Heinrich of the University of Basel, Switzerland.

At the conclusion of the roundtable gathering, participants debriefed key members of the Senate Constitutional Reform Committee on the event and provided an interim report. Deputy Senate President Ekweremadu thanked the Forum for its efforts and pledged to work with the final report when it is delivered.

The event, held in Abuja on July 7 9, 2009, was funded by the Canadian International Development Agency. 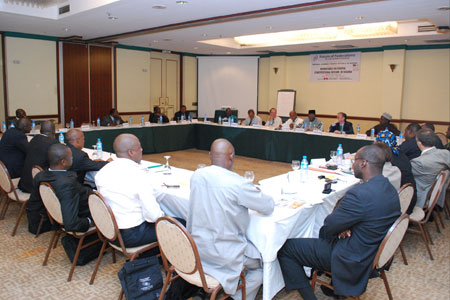