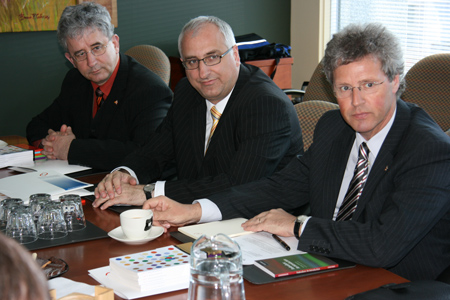 The German-Canadian Parliamentary Friendship Group, made up of members of the Bundestag in Berlin, visited the Forum on March 29, 2008. The Bundestag is Germany’s national parliament. The delegation came to the Forum to share experiences and gain insights into the nature of Canadian debates about challenges related to federalism, challenges which are currently debated in Germany. Among these challenges are fiscal federalism, or how the provinces and the federal government share taxes and other revenues; the role of cities and municipalities in a federation; and education in a federal system. Germany’s post-secondary education system is currenlty being considerably revamped. Germany, which became a partner of the Forum in 2008, is also going through a major reform to other aspects of its federal system of governance. The German politicians emphasized that it will require much political will of the highest order to bring about the necessary reforms, especially in the area of fiscal federalism.

The parliamentarians were briefed by Forum President George Anderson; senior advisor Hans Gnodtke; and Felix KnÃ¼pling, the Forum’s director for Europe. The delegation was told of the Forum’s organization and programs. The visit was organized by the German Embassy in Ottawa.