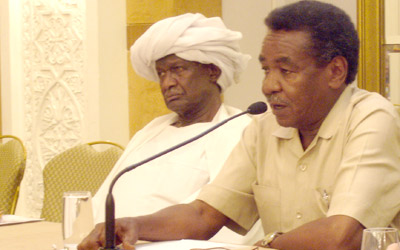 Tag El-Sir, Secretary General of the national Strategic Planning Board, speaks at the Forum’s course in Sudan. Ibrahim Moneim Mansour, Chair of the Fiscal and Financial Allocation and Monitoring Commission, sits to his left.

From April 28-30, 2007, the Forum of Federations launched in Khartoum, a custom designed course on federalism, in support of its broader capacity building work in Sudan. The course was presented to a wide range of participants from NGOs, academia, media and legislatures, as well as local, state and central government. It is meant to serve as a foundation for the Forum’s future work in Sudan. Training and awareness-raising are critical elements in the Forum’s larger Sudan federal governance program, a $2.2 million multi-year undertaking funded by Canada’s Department of Foreign Affairs and International Trade.

Federalism is considered by many to be a necessary element for sustainable peace in the conflict-torn nation of Sudan. But it is not yet well understood by most Sudanese. The course, titled Core Principles of Federalism: Toward Sustainable Peace in Sudan, is thus meant to explain and demystify this form of governance that involves the sharing of power between different tiers of government.

The training was held in Khartoum from April 28-30, 2007. It addressed the classic topics of comparative federalism and built upon participantse’ knowledge and experience as leaders in their respective organizations and professions. The training sessions started with a wide-ranging discussion of participantse’ understanding of the federal features of Sudan – including its geographic, political, economic, historical and social characteristics. This was followed by a number of mini-lectures and discussions on the core characteristics of federations – including power sharing, wealth sharing, the role of the upper house and constitutional courts, intergovernmental relations (IGR) – and the new arrangements that have been set out in Sudan under the peace agreements and Interim National Constitution.

The course was conducted by Dr. Peter Meekison of Canada, and Dr. Omer Awadalla Ali of Sudan. It was facilitated by Shawn Houlihan, the Forum’s director for Africa. A key highlight of the three-day program was the lectures given by two prominent guest speakers, Dr. Tag El-Sir, Secretary General of the National Strategic Planning Board; and Dr. Ibrahim Mansour, Chair of the Fiscal and Financial Allocation and Monitoring Commission (FFAMC). Dr. El-Sir outlined the new national planning approach, which is intergovernmental in nature, as well as the challenges arising from low capacity and inadequate understanding of the different rights and responsibilities of the various tiers of government in a federal country. 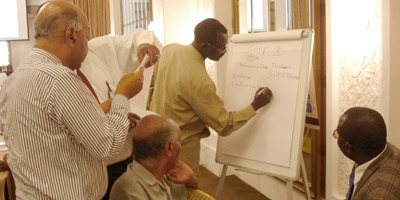 Dr. Mansour discussed the successes and challenges that arose in the first year of the FFAMCe’s existence. Of particular interest to the participants were the Commissione’s recommendations on the total amount of funds transferred from the federal government to all the states of Sudan, and how those funds are shared among the states. The next step is to build capacity and systems for monitoring their actual implementation.

In a follow-up discussion, Dr. Mansour stated that in his view, ‘federalism is the best model for a country like Sudan.

‘Federalism was considered high treason fifty years ago, and then later a crime. It was not implemented when we had the opportunity to do so after independence and in the 1972 Addis Ababa Agreement between North and South, and at other points of our history.

‘This has created so much distrust. We all have an obligation to do our utmost to see that the crime is not committed and the opportunity is not missed again.’

In the final session participants shared their ideas about priorities and, based on their new knowledge of comparative federalism, suggested indicators that should be targets for success. All sessions sparked discussion and concern about local government and the serious risk that progress will not be made unless this tier of government receives resources and is better empowered. Another major issue that recurred in discussions is the challenge of building federalism in a society where democracy and peace have not yet taken root, while recognizing that without federal arrangements it will be difficult for the society to move toward democracy and peace.