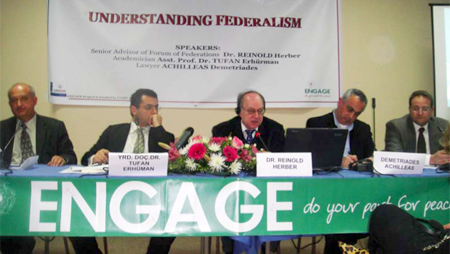 Forum official Dr. Reinold Herber (centre) explains what federalism is, and how it works, to an audience of Cypriots.

The Forum of Federations recently delivered a series of presentations on federalism in Cyprus to help the Greek- and Turkish-Cypriots identify ways to unite the divided Mediterranean island state.

The Forum was a guest of the Greek-Cypriot NGO, Support Center and the Turkish-Cypriot NGO Management Center.

Cyprus is a former British colony which has been divided for more than 30 years. The activity is part of the United Nations Development Programme’s (UNDP) efforts to assist the two communities resolve their decades-old stalemate.

Cyprus entered the European Union in 2004.

In that year its majority Greek-Cypriot population rejected a reunification proposal, called the "Annan Plan, » named after then UN secretary General, Kofi Annan.

Since the election of the Greek-Cypriot leader, Demetris Christofias, in 2008 there has been renewed hope for a settlement.

In March 2008 Mr. Christofias met the Turkish-Cypriot leader Mehmet Ali Talat for a first talk under the supervision of the UN.

More recently, in January, UN Secretary Ban Ki-moon visited and had talks with both leaders of the divided country, encouraging them to form a united nation.

As a result, interest is building in the country to finally resolve its political impasse.