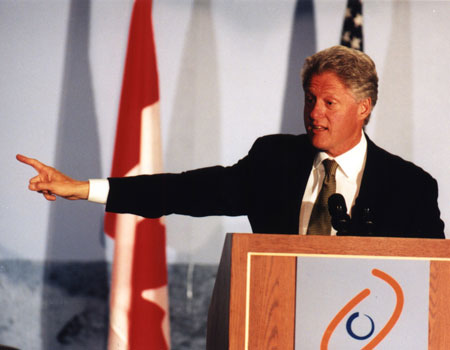 Ten years ago this week delegates from some fifty countries gathered at Mont Tremblant for the first international conference on federalism.

The conference is best remembered for the stirring speech Bill Clinton gave in support of federalism.

Many then were surprised by so much interest in federalism, not realizing that 40 per cent of the world’s people live in over twenty-five federations.

There were only four functioning federations when World War II ended: the United States, Switzerland, Canada and Australia. Today’s federal countries also include: Germany, Austria, Belgium, Spain, Russia and even Italy in Europe; Mexico, Brazil and Argentina in Latin America; India, Malaysia, and Pakistan in Asia; and Nigeria, Ethiopia, and South Africa in Africa. As well, the post-conflict states of Iraq, Bosnia-Herzegovina, Ethiopia, and Sudan have adopted federal constitutions, and Nepal is committed to doing so. There are advocates of federalism for Cyprus, Sri Lanka, Bolivia, Indonesia, the Philippines and several other countries.

The one factor that has most strongly driven the emergence of new federal regimes is democratization. In post-Franco Spain, the Catalans and Basques, and now other regions, have used democracy to achieve greater autonomy. Mexico, Brazil and Argentina, have all become much more truly federal with democracy. Russia leaped into a rather chaotic federalism with democratization under Yeltsin and its federal character remains important, even under Putin. South Africa adopted a federal framework to reassure certain minorities when it adopted democracy after apartheid. So did Ethiopia after the overthrow of military dictator Mengistu Haile Mariam. Belgium and Italy moved to federal or quasi-federal arrangements to respond to democratic pressures for decentralization

Far more challenging are federal arrangements in post-conflict countries, where deep divisions make any form of democracy fragile. As well, there have been various failed federal regimes, notably those which had been stitched together by departing colonial powers or which emerged following the collapse of communism.

Thus the last sixty years have seen a tremendous spread of federalism. While not always successful, it has clearly been an important option that has fitted more and more countries. If, democracy continues its spread in this century, federalism is likely to spread as well. For example, should China, Iran or Myanmar become democratic, the nature of their societies would push them towards federal arrangements. Even a number of small multi-ethnic countries, especially in Africa, could become federal as a way to manage their diversity.

Of course, undemocratic measures can sometimes undermine federalism when identity politics tear a society apart, as in the former Yugoslavia. Federalism requires leaders who promote dialogue, tolerance and accommodation.

One of the biggest questions for the future of federalism relates to the European Union, where views are sharply divided between those who see a logical trend towards federalism versus those who think the EU’s diversity and vested local interests will always be a barrier to a directly elected European government. I tend to the first view. Over time, Europe will likely be pushed in a more federal direction, and this because of the need for a central entity with more fiscal weight at the centre, for a common defence and foreign policy, and to address the â€˜democratic deficit,’ and this against a backdrop of an increasingly shared European identity.

Thus federal experiences are likely to be even more relevant in this century than in the past. This will drive even more interest in international dialogue and shared learning about federalism. Canada, with its long and sometimes challenging experience, has been a leader in such dialogue. The Fifth International Conference on Federalism will be in Addis Ababa, Ethiopia, in December, 2010.