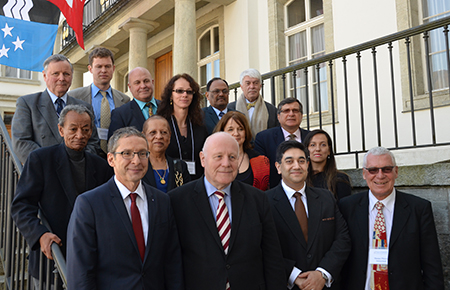 Members of the Board of Directors for the Forum of Federations met on March 17, 2015.

The Forum of Federations held its annual Board of Directors meeting on 17 March 2015 in the government building of the Canton of Aargau. The representatives of the member countries among them Australia, Canada, Ethiopia, Germany, India, Mexico, Nigeria, Pakistan and Switzerland met to review Forum’s work during the current fiscal year and approve the program of work as well as budget for the fiscal year 2015-16.

The Board members also visited the Centre for Democracy Studies Aarau (ZDA). The Centre represents an ideal stage for a dialog between researchers in the fields of democracy and federalism. In the past the research facility provided expert analysis for the Forum of Federations.

On Wednesday, 18 March the Board and Forum staff visited the federal parliament building and the House of the Cantons in Bern. The Forum was welcomed in the federal parliament building by the President of the Council of States Claude HÃªche and other Members of Parliament. Later in the day a public event was held in the “House of the Cantons” under the title “Centralization and Federalism: Trends and Solutions“. At the conclusion of the Board meeting, the members and Forum staff were hosted at a dinner by Luzius Mader, Deputy Director of the Federal Office of Justice and Police. Other government representatives present at the diner were Yves Rossier, State Secretary, Federal Department of Foreign Affairs and Marie-Gabrielle Ineichen-Fleisch, State Secretary, State Secretariat for Economic Affairs.