The event was hosted by JÃ¼rgen Weiss, Vice-President of the Austrian Federal Council, 2nd from the right in the first row. 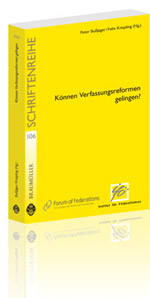 The book is titled KÃ¶nnen Verfassungsreformen gelingen, ‘Can Constitutional Reform Succeed?’ It was co-edited by Peter Bussjager, the Director of the Institute for Federalism in Innsbruck, and Felix Knuepling, the Director of European programs at the Forum of Federations.

The book was launched in the Austrian Parliament on Feb. 19, 2008. The event was hosted by Juergen Weiss, the vice-president of Austria’s federal council. It was attended by civil servants and members of:

The 200-page volume contains papers presented at a Sept. 19-20, 2007 conference held in Vienna to provide a forum for Austrian legislators to exchange ideas and experiences and to generate discussion on possible ways of bringing about state reform in Austria.

Papers at the September 2007 event were given by Luis Durnwalder, head of Italy’s autonomous region of South-Tyrol; Arnold Koller, the former President of Switzerland; and JÃ¼rgen Weiss, the Vice-President of Austria’s Federal Council.

Other papers were presented by numerous international and Austrian constitutional experts.

According to one media review of the book, ‘a common thread winds its way through all the presentations, as described in the preface of the book: only when a consensus is reached on relevant political strengths and between the different decision-making levels, for example, between the federal government and the provinces, only then is it possible to succeed.’

The book is published by the Austrian publishing house, Braumueller, www.braumueller.at

See the following report on the book, published by the Austrian parliament:

Vienna (PK) -” On the occasion of the planned state reform in Austria, an international conference was held in Parliament in September 2007 to discuss the topic, ‘Can Constitutional Reforms Succeed?’ High-ranking experts and practitioners were invited by the Institut fÃ¼r FÃ¶deralismus and the Forum of Federations to shed light on recent constitutional reforms in Canada, Germany, Italy and Switzerland, and to discuss the chances of comprehensive constitutional and administrative reform in Austria. (See Parliamentary Correspondence (PK) 645/2007). The conference proceedings, edited by Peter BuÃŸjÃ¤ger and Felix KnÃ¼pling, now offer to all those interested the opportunity to read about this topic.

Containing more than 200 pages, the book was presented Feb. 19, 2008 by Federal Council Vice-president JÃ¼rgen Weiss to an invitation-only audience in the Upper House, where the focus was not only on the book, but also on the current status of state reform in Austria. Guests, including former National Council President, Andreas Khol, and constitutional expert, Theo Ã–hlinger – both members of the think tank established to offer expert advice in advance of state reform – were invited to provide insight into the issues from their own perspective.

In his greeting, Weiss explained that he was reminded somewhat of Fu Long, the panda cub, with respect to the latest proposals put forth by the think-tank. Its report lay in the hands of the Federal Chancellor, he said, where it remains hidden from public scrutiny, much like the panda cub in the birthing chamber at the Vienna Zoo. However, there were two observers who made it possible to look inside the ‘birthing box’, said Weiss, alluding to the two guest experts, Khol and Ã–hlinger.

The published conference proceedings were presented in person by the two editors and by the former head of the Constitutional Law Department in the Federal Chancellery, Wolf Okresek, who is also a member of the board of the Forum. 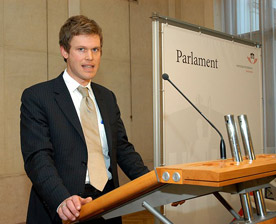 Felix KnÃ¼pling of the Forum, addressing an
invitation-only audience in the Upper House

BuÃŸjÃ¤ger and KnÃ¼pling were both pleased with the publishing of the book following the successful 2007 conference, despite considerable time constraints, and that it is now available to those who were unable to attend the conference, but were interested in reading about it. It was an important opportunity for the Institut fÃ¼r FÃ¶deralismus to analyze and comment on the constitutional reform process in Austria, explained BuÃŸjÃ¤ger, head of the Institut. KnÃ¼pling pointed out the importance of an international exchange of experiences and expressed the hope that the book would stimulate further debate on state reform in Austria.

Forum of Federations board member, Wolf Okresek, expressed similar sentiments. He stated that the speakers at the conference not only dealt with the issues surrounding constitutional reform in their own country, but also concentrated primarily on how these reforms were brought about, thereby providing a wealth of background information that would otherwise have been largely inaccessible. Nonetheless, Mr. Okresek believes that whomever is interested in the Austrian reform project will enjoy this book as this topic was the focus of the roundtable discussions. In Okreseke’s view, Austria appears to have decided to follow the same route as the one taken by Switzerland, namely to implement constitutional reform step-by-step, based on compromise.

During a workshop discussion, a former National Council President Khol reported on the current status of constitutional reform efforts: substantial sections of the initial package have already been implemented, except for those pertaining to administrative jurisdictions. However, a government bill to establish provincial administrative jurisdictions is expected by the middle of the year. Khol described the Federal Asylum Court as a mistake from which he distanced himself. No one in the group of experts spoke in favour of this model. It is also extremely doubtful that this solution will stand the test of time.

Reaction to the second package, delivered to the federal government on December 19, 2007 has yet to be heard. Given its considerable scope, Khol spoke, in particular, of the newly organized division of responsibilities based on the 3-column model, which made it possible to reduce 180 areas of competency to 17 federal, 16 provincial, and 9 joint responsibilities.

With respect to the reform of the federal council, Khol made reference to, among other things, one alternative based on the example set by the German Bundesrat that anticipates the transformation of the LÃ¤nder Chamber into a powerful state organ designed to participate in federal lawmaking. Khol emphasized that education should be completely reorganized to allow the federal government to legislate and the provinces to implement the laws. At the same time, the various ‘councils’ would be eliminated and not replaced, with collaboration taking place solely through provincial government advisory councils.

Khol also discussed another point contained in the second package that relates to the strengthening of provincial autonomy, in particular, the cancellation of all rights of mutual consent.

A third package, already in the final stages of preparation, will contain a catalogue of human and basic rights. A precondition of this last section will be the implementation of the second package.

In conclusion, Khol felt that constitutional reforms are a test of endurance, a long march through time.

Some changes have been made over the years, but there is still much work to be done. Constitutional expert Theo Ã–hlinger reminded the audience that Austria has been dealing with constitutional reform for over 50 years, especially since joining the Human Rights Convention of 1958 raised the issue of basic rights. Plans for a complete review of the federal constitution in the 1970s led to nothing more than a few mini-reforms. On the other hand, the Basic Rights Commission laboured for 30 years, but was never reconvened.

According to Ã–hlinger, the high point in the evolution of the reform debate was the Austrian Convention. It ultimately failed, yet still managed in some ways to raise awareness of the Constitution, which, until that point, was completely unknown. Ã–hlinger stated that, given the current government program, constitutional reform has never been closer.

Ã–hlinger suggested that the first package, of which only half could be implemented, should not be overrated. Fortunately, from this point forward, the practice of including constitutional provisions in international treaties will cease. And, in response to the question of whether constitutional reforms can succeed, Ã–hlinger explained that it depends on whether they become a primary concern at the highest political level. In his opinion, this is currently the case at the European level. It was also clear to Ã–hlinger that, in any event, constitutional reforms require a lot of time.

The book, Can Constitutional Reforms Succeed?, edited by Peter BuÃŸjÃ¤ger and Felix KnÃ¼pling, contains not only all the papers presented at the September 2007 conference , but also various brief statements made and topics discussed at the conference. In addition to numerous international and Austrian constitutional experts, the participants included, among others, the head of the South Tyrolean government, Luis Durnwalder, former Swiss Federal President Arnold Koller and Austrian Federal Council Vice-president JÃ¼rgen Weiss.

The goal of the conference was, as outlined in the preface, to provide a forum to exchange ideas and experiences, and to stimulate further discussion on state reform in Austria. As a result, it was less about reviewing the issues surrounding constitutional reforms in Canada, Germany, Italy and Switzerland, and more about analyzing the conditions and political expectations needed to achieve constitutional reform.

Wolf Okresek pointed out that each country, as the conference demonstrated, took a different route. Thus, his concise description, based on Thomas O. Hueglin’s observations, showed how deficits in Canada are offset through pragmatic negotiations at the political level and how a kind of ‘contract federalism’ has taken hold. On the other hand, Switzerland successfully applied the building-block principle, but needed 30 years to implement constitutional reform.

A common thread winds its way through all the presentations, as described in the preface of the book: only when a consensus is reached on relevant political strengths and between the different decision-making levels, for example, between the federal government and the provinces, only then is it possible to succeed.

Can Constitutional Reforms Succeed? was published by BraumÃ¼ller Verlag.